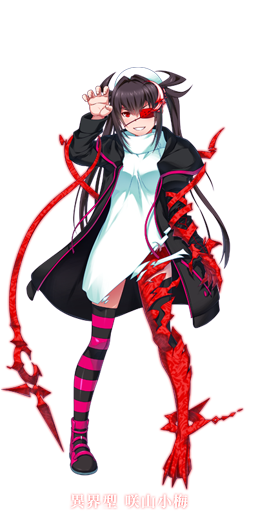 Guest character from Lord of Vermillion IV. She is also known as MAAB Scharlachrot

An ice assist that shoots a ball of ice that travels at a moderate speed. Usable as a combo extender and can be used in neutral to whiff punish and start a combo, but with Koume's already long range normal's using Elle as a whiff punish is sub-optimal and there are better assists to use as combo extenders.

A fire assist that hits low and forces a standing state on hit. Can be used for niche combos due to its re-standing properties but has very limited use in combos for Koume.

An ice assist that consists of Evaine volleyball spiking a watermelon at a fast speed; wall bounces up to three times. A useful tool for neutral control and in some scenarios an okizeme tool, but unnecessary for Koume as there are assists that work better with Koume's kit for these rolls.

A fire assist that covers a large area and slightly tracks the opponent. Balin is extremely fast and plus on block letting Koume use her to control neutral and end unsafe block-strings such as a 623x ender. Balin also allows for an easy elemental counter hit when used after Koume's 5d, March Hare.

An ice assist that is both fast and has amazing horizontal range, hitting from full screen. Like Balin, Magic Guild is quite fast and plus on block, allowing her to be used both in neutral and to end unsafe block strings. Koume can implement Magic Guild in to most combos and is especially useful after Koume's 214d, Eligos, for an easy elemental counter hit.

A wind assist that acts as both an amazing anti-air and a combo extender for Koume. Techno-Smith has phenomenally fast startup and has a very high reaching hit-box making her a useful anti-air tool. Her use in combos is limited but she has great use in corner combos, specifically being used to follow up Koume's 2d, Tri-Horn, for an elemental counter hit, allowing for further follow-ups.

An ice assist that spawns on the ground at the players location, striking a large area in front of him when struck or after a bit of time. A great tool for both okizeme after a combo or for counter poke, Lancelot is great for both applying your own pressure after a hard knockdown and for alleviating your opponents pressure. Unfortunately Lancelot has next to no use as a combo extension limiting him as a neutral option.

An ice assist that hits diagonally upwards at a 30° angle. Tor is a fast assist with good damage that allows for various follow ups due to her ice element, however due to her angle of attack Tor can be considered to be a sub-optimal version of Magic Guild Arthur for Koume due to Tor's weaker usage as a neutral tool and her more limited potential as a combo extender.

An ice assist that consists of a laser that hits 20 times and has a small amount of startup before the laser is actually fired. Although this must be combo'ed into Koume has no trouble doing so being able to convert most combos into Pharsalia, a common choice being to use her after Koume's 214d, Eligos. Pharasalia also confirms Koumes 214x+x, allowing for high damage combos.

A non elemental assist, Guinevere hit the opponent in an area in front of the player on the ground. On hit she increases the current mana cost of each support knight for your opponent by one each for the next use only. This effect stack but won't cause an assist to cost more than five. Koume can use Guinevere to end most mid-screen combos and when used in the corner, you can continue your combo. While she does not offer much to Koume in terms of damage, when used in tandem with Koume's meter stealing auto combo Guinevere allows Koume to grind out the opponent for much longer provided the player can successfully control the neutral.

A fire assist that consists of a laser shot at 45° diagonally upwards and hits 16 times. Only useful as a combo ender and while Mordred does around 900 more damage than Pharasalia Koume cannot follow Mordred with anything, making him a sub-optimal combo ender.

Note: Colors 20 and 21 were pre-order exclusives for JP PSN and Amazon respectively. Unfortunately, they aren't selectable on Steam without the use of Cheat Engine.