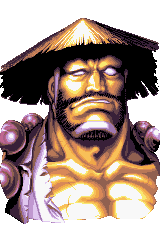 Unzen is a high-tier character. His strengths including incredible pressure strings and a short jump with a high priority cross up that can be hard to get away from. His weakness is having a lot of trouble dealing projectile characters with decent anti-air. With the right setup and MAX meter he can kill in a single combo, but it usually takes him two combos.

Primarily played in Weapon Off, which is how he starts the match. The only reason to equip the hammer is his Weapon On 5.B becomes a pretty decent poke, comparable in range to his Weapon Off 6.A; though he loses access to his powerful loop combo. Generally it's not worth using the hammer.