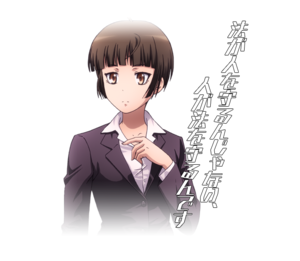 The newly assigned Inspector of Unit 1. Considered a model citizen due to her ever calm demeanor and for passing the exams with the highest score for employment on several public sectors and private corporations. She decided to join the police due to being the only place where no one obtained a score as high as hers, thus she believes to be able to do something there that no one else can.

Akane shoots a beam from her Dominator gun. By default, she shoots a Paralyzer, putting the opponent in a crumple state on ground hit. If the opponent's health is red, she shoots an Eliminator instead, increasing its start-up, but dealing more damage over two hits with a larger hitbox.