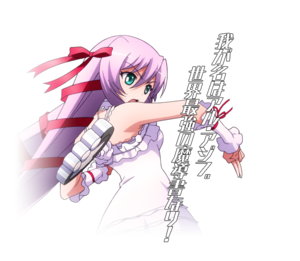 Al Azif
My name is Al Azif. I am the world's most powerful grimoire!

Introduction: The physical manifestation of spirit that lives within the world's strongest magical tome. Although she's roughly 1,000 years old, she has a petite and unassuming appearance. Despite that appearance, she has a very arrogant personality.

Al possesses a large variety of tools, including a strong projectile, a DP, and large pokes for both ground and air, allowing to her perform well in a variety of situations. Also of note is her re-stand oki, which gives her a strong way of maintaining offensive momentum once already acquired.

Al is almost up there with Ein in regards to moving around the screen effectively: Her rolls aren't particularly remarkable, but her run is fast, her airdashes cover good space in little time, and her forward jump actually covers quite a large amount of space for what it is.

Barebones, anytime anywhere confirm. You can go into 623C instead if you're close enough for better carry, though you obviously lose out on the knockdown.

If you're close enough to connect with sweep, then you can go into this instead of the more standard routes.

Standard anti-air confirm. An immediate j.D crosses over the opponent unless they're in or close to the corner, so change the timing based on what you want to do.

The j.623C will sideswitch outside of the corner, where this is also your go-to route.

Most standard corner route. 623C may whiff or fail to combo if you're string doesn't start fairly close, so be mindful of that.

For when you're too far for the above route. Doesn't knock down, but you're still plus.

Not quite Ein anti-air damage, but close enough. Also works from air-to-air strings, the 5E can drop on Ruili from some heights.

The 5E here drops on Ruili more frequently than the anti-air combo, so you might want to try something different with her.

At most heights and prorations, j.623C can be combo'd into j.214AB while in the corner, which can then be followed up by 63214C, allowing you to chain into sweep into 22X oki. The command grab link can be kind of unforgiving, so you may want to consider whiffing another move during the 214AB launch to time it (even if this makes your followup more obvious), or just go straight into sweep (which will also give you some airdash mixups from the jump cancel) instead. If you have the extra meter, then you can also follow up j.214AB with VR to kill.

Not terribly high damage, but also the least resource intensive way of getting a knockdown from throw midscreen outside of just not converting at all.

As stated previously, 214AB does not possess any maximum screen time, meaning that certain movement patterns will prolong it's activity. This route uses that to maximize damage, tailing the scimitar to have it hit the opponent a third time. If you're too close to the opponent, then this route results in the scimitar reaching you before you can bring it to them, but you can do superjump j.D (which, conversely, doesn't work if you're further away) post-super instead to rectify this.

Less damage and corner carry than the tailing routes, but worthwhile if it'll corner them because of the oki. The variations in timing you can get might make the command grab link kind of challenging, so experiment in training mode to see what works.

Convenient 22X oki off literally any grounded string. Thanks, Henners.

If they're far enough away when you 236A them, you can catch the opponent on the farther part of Henri's spread and get the above route with more carry.

Henri also gives you a strong DP combo while still allowing you pressure if they block. Again: Thanks, Henners.

Midscreen only combo that carries really far, and does very high damage for the resources you're using. You can add 1 more 5E>5D rep after the first one if starting from 3/4ths of the screen away.

Sideswap variant of the above.

Kaigen is another assist that affords you sweep oki in a very convenient manner, and at a higher amount of damage, although Henri has more utility.

She's also able to give you the knockdown from air strings, too, which is nice.

The most standard EB route. Full screen corner carry, though you'll have to omit the 5E if they're not far enough in by then. Works after both throws (though you'll have to delay the 623B a bit for an aerial one), and can also end with 6A/j.A>air combo>etc. if you don't have 3 bars, which can itself go into with j.623C to Kaigen/Henri (which still allows you to Lethal Blaze after).

You may have to resort to this route from throw over the standard one if you're in the corner when you land it. Also works from airthrow, and the same alternate enders still apply.

Air-to-air confirm that, as with the ground route, carries completely to the corner. If you're close enough, the first j.D will cross over them, in which case, assuming they're now near the corner, you can instead go into 623C, 5B>5E etc. after the j.C to still convert.

Alternate corner route using Henri. You want the opponent to be as high as possible for the first 5E so that you cross under them with the second roll, so it's best to delay the j.C a bit.

While this potentially isn't worth spending an assist slot on, if the opponent is near the corner then it's possible for Al to cancel a ground string into Yoishi, combo into another one ending with 236A, and have the cloud meaty the opponent. If they're cornered, then you can dash into command grab with them being unable to move away. This is beatable by Vanishing the cloud and backdashing/dashing up/calling assists, or through a horizontal reversal, but those options are either quite punishable or beaten by you dashing up and 2A'ing (unless they have an assist that can interrupt that), so this is still quite in your favour.