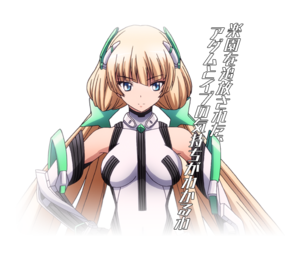 Angela Balzac
Now I know how Adam and Eve felt when they were expelled from paradise.

Angela was raised in a Matrix-like computer system on a space station orbiting a post-apocalyptic Earth. After a hacker from the devastated planet Earth below breaks into the system, she is tasked with finding and stopping the hacker in the real world. To do this, she is transferred into a clone body, given a mech, and told to meet up with an agent living on Earth named Dingo.

Since she takes a really long time to start attacking, you'll need a setup to combo into it.