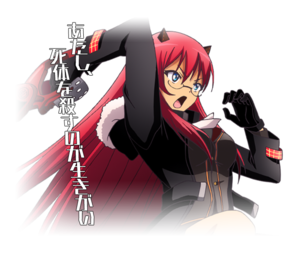 Kibanohara Ethica
My purpose in life is to kill corpses.

Introduction: A brash beauty who works with Nagaoka Souun as a Living Dead Stalker. She wields a wide array of weapons, including a chainsaw Rabbit Punch, a fully automatic shotgun (with a bayonet) and an assault rifle (with another bayonet), switching between them freely depending on the situation. Unlike her partner, Ethica tends to act impulsively, relying on her intuition more than on cold logic. She also happens to be a lesbian who is extremely fond of cute girls.

Ethica is the token grappler of the game, having a wide variety of close-range tools to make the opponent's life miserable. As it usually goes with Examu grapplers, her movement options are far from being as sluggish as you would expect: in fact, her rolls are some of the fastest and longest in the game (even if the ground one's recovery is high)! Couple that with the whole partner system, and it becomes trivial for Ethica to kill her opponents dead.

In addition to the aforementioned rolls, Ethica comes equipped with a moderately large step dash, a very wide arc on her superjump, and airdashes that travel and recover quicker than most of the cast. She also has a far-reaching slide in her 2E, giving her all sorts of ways to get into the ranges she wants to be at.

C+E>A>A>A>A>A>A(8hit)>A Route with the highest guaranteed damage regardless of scaling. Grants about 7000 damage raw.

j.E wallbounces give Ethica the majority of her meterless damage, you will be doing them a lot. All of these specific sequences give full corner carry (you switch sides pre-623B). They also may drop if you're nearer to the corner, so transition into another route if you are.

The most standard corner route. As with the routes above, this sideswitches pre-623B, something you have more freedom to do nearer the corner.

Your BnB. If 2E connects, you get a knockdown. If your 2E hits at the very tip of its range, you can follow up with another 2E.

Basic mid-screen corner carry. Grants a knockdown and leads straight to your okizeme.

Unlike the above combos, this does not end in a knockdown. After executing it, you can use 2A or a command grab as a reset. 2A > 2B > 2C > 214A itself is a good blockstring. Keep in mind that you are at a bit less of a frame advantage if the opponent is not hit with the tip of 214A. Can trap the opponent with this technique if you use a command grab with enough invincibility like 41236C.

A near-corner combo. It is better not to ad a 5C to this due to scaling. With B stinger, you may miss if you’re too close to the edge of the screen.

A combo similar to the one listed above. Ends in an advantageous situation, so it’s important to learn this. You generally will have the opponent behind you around the end of this, so you would input Stinging of the Dead as a 421 motion.

Command grab combo. Can be used to hit confirm your command grabs.

A combo started from a 6A launcher. The second sj.E may not hit depending on your distance from the corner. Unlike the earlier corner combo, you don’t always have to adjust your 623B input for this one. You just need to adjust the distance you travel via a vertical or backwards super jump. You may need to reverse depending on your distance, however.

Whether you use 214B or 214C depends on your distance from the corner.

You must delay the first j.E a bit and then pick it up with 2A or 5A. Can be a bit troublesome since it’s a bit spacing dependent.

Like some of the previously mentioned combos, this requires you to input 623B as a 421 due to the side swap at the end.

The height and position don’t matter as much for this combo, so it is easy to use.

This is your basic recipe for meter use. An important source of damage using your lethal blaze. If you are worried about dropping the input, you can omit the 4123+A/B/C.

Super confirm from command grab or anti-air. Note that you cannot directly combo into 236AB from 41236+A/B/C.

For when you want to do as much damage as possible with just 1 stock of meter.

Franco allows you to either convert or apply better pressure from slide, making the tool an even greater threat.

If you are near the screen edge, you can use 5E instead of IAD j.E.

Only works with the A version because the B and C versions have the opponent bounce differently.

There are many situations where you can use 41236+A/B/C since it is invincible, so this combo has many chances to occur. It is easier to do this combo with an airdash j.E instead of just a raw j.E

The only way to combo with a partner cancel from 623A requires Althea as your partner.

Partner canceling is essential if you want to increase the damage you get off of a sweep since you cannot cancel into special moves from 2E.

This is the most important utility EB provides for Ethica: A way to get much, much more damage off Brandish and slide. The command grab route is also doable off ground strings, too, through using dash 6A to go into the Charge.

Ethica’s basic combo blast route. You can start this from many situations.

Ethica’s second combo blast route. The execution depends on your distance from the corner.

Grants a lot of damage, but the starters you can use for this are limited.

Sweep starter. It is very easy to use, but the proration is not that good and it is difficult to extend damage with this.

Screwing of the Dead starter. There are many situations where you can use this due to the invincibility of the command grab.

Second combo from Screwing of the Dead starter.

Stinger starter. Unfortunately, this will not work with 623A.

Brandishing of the Dead starter.

There are some situations where you need to improvise after using a partner blitz in order to properly convert a combo with this character. Synergizes well with other partners, is good after canceling out of most of your specials, and has strong lockdown. Take advantage of the fact that this partner can OTG. You can do something like 2E > Henri OTG, then set up something like a throw or charged 5E while they’re being hit.

Ethica has a lot of routes focusing on wall bounds from 5E and j.E and Spica is useful for comboing from that situation. This partner has a fast startup as well. Easy to convert with and can lead into Dead of the Dead.

May not seem good at first, but since this partner has a fast startup, she is useful. Easily combos from a command throw or a stinger. Useful against Ein and Saya.

Used much like how you use Spica for 5E and J.E wall bound combos. Easily converts into a combo. The damage of Amy herself is not that high, but she easily autocorrects spacing for the followup combo that you execute.

The height of her shot is closer to where the opponent will be after 5E and J.E wallbound combos and the comboability is good. Causes a crumple state, but only on grounded opponents. The slow startup of this partner is not really a big deal when used with Ethica.

Ethica’s previous stepdashes adds to the inertia of her next action. It is possible to input a command grab during a stepdash to hide the input and slide towards the opponent with the grab having increased range or to stepdash into a neutral jump for a subtle crossup j.A.

At the end of a forward roll (5D), you can cancel with a special move. While avoiding projectiles with your roll, you can approach the opponent and buffer in a command throw. You must time this carefully, however, in order to have your throw come out once your roll animation is over.

If you hold down the D button after deploying a Vanishing Guard, the vanishing guard state will be maintained even if you are no longer holding a direction. While holding D, buffer the motion for a command grab such as 632146 or 6321463214. Then, when the Vanishing Guard succeeds and you block an opponent’s attack, you can immediately command throw them.

It is possible to use 214C on okizeme without getting punished on block. If the spaced correctly in the corner, the disadvantage on block decreases (though you are still at frame disadvantage.) Can be set up from any basic combo that knocks down in the corner with a move like 2E. If timed correctly, a meaty 214C will not be punishable on block. However, this depends a lot on how fast the opponent techs, but it is still a technique worth noting.

Video from pet, a Japanese player, detailing punishes Ethica can perform for various situations (some examples may have been invalidated by the 1.08 update)