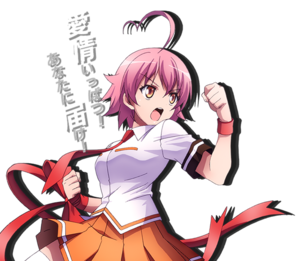 Heart
I hope this will touch your very Heart and Soul!

Introduction: Full of energy. Pure and innocent. Simple-minded. She really believes that there are no bad people in the world. For the sake of love and peace, she runs all throughout Japan with the guidance of the love arcana, Partinias, who was with her ever since her childhood.

Heart is a mobile rushdown-style character who excels at opening opponents up with ambiguous mixups. Her primary tool for this gameplan is her unique aerial homing dash (as taken from the Arcana Heart franchise) which allows her unparalleled flexibility in choosing her approach. She also has decent tools for zoning with her Arcana projectiles, which can also act to cover her homing dash at full screen. On the other hand, her ground game is quite limited, with short-ranged normals and lack of access to her homing dash mixups.

NOTE: Frame data is not tested exactly, and may be slightly off.

This is "homing", a.k.a. "homing dash", Heart's unique movement option. If you seen the Arcana Heart (AH) series, you may have an idea of it already. In this game, Heart can only use homing from the air, and it completely replaces her air roll. After homing is initiated, you fly towards the opponent and can somewhat control where you're flying and landing by pressing/holding a direction. Like the air roll it replaces, homing is invulnerable to projectiles for a short period after initiation.

Unlike AH3, canceling a move into homing does not cost anything. In AH3, homing-cancels cost 1 bar, but in Nitroplus Blasterz it's totally free. Also unlike AH3 you cannot speed up your homing by pressing D again, but using a normal after homing startup does give you some more momentum (?).

See this Arcana Heart comic for a quick visual representation.

Jump cancelable. Doesn't hit crouchers unless they have a taller crouching hitbox, can catch some jump-ins but don't rely on it as an anti-air.

Jump cancelable. Anti air with a good amount of range. Does not hit crouchers. Also used in combos, can be chained into from almost all grounded normals.

Not jump cancelable, but still special cancelable. Shoulder rush that's slightly unsafe but the special cancel trait allows for certain frame traps. It's on the slow side, so be careful about over using it. Not bad to use once in awhile, especially if you escape or special-cancel it.

Not jump cancelable. Standard 2A, hits low and combos into itself.

Jump cancelable, similar to 2A but has some more range.

Jump cancelable. Used in combos but also good as an anti-air. In combos on grounded opponents, this move has short horizontal range, so you need to be close. As an anti-air, it will catch things almost on top of you and in front and above. Has some start up so be mindful when using it as an anti-air. Compared to 6A, it lacks the head-invincibility making it harder to use, but has a lot more un-techable time on hit to make up for it.

Not jump cancelable, but still special cancelable. Standard sweep, knocks down. Cancel into a special to do a combo.

Double jump cancelable. While it lacks range, it's very good an air-to-air or even air-to-ground. The knee and the arm both have hitboxes.

Double jump cancelable. Heart has sticks her arm out at shoulder-level. Your main recommended option for air-to-air normals. Decent start up, combine this with homing and you could easily win most air-to-air situations.

Not double jump cancelable, but still special cancelable. Has some horizontal range but not much, works well as a air to ground, can cross up but not reliable as a cross up.

236A - 13 frames - Only knockdowns on airborne opponents, meaning standing or crouching opponents will stay standing. Slightly unsafe but not easily punishable.

236B - 19 frames - Heart winds up a little before hitting the opponent, will knockdown standing and crouching.

236C - 27 frames - Heart winds up even more before the punch. Wallbounces on hit, mainly combo fodder.

Reversal. Air OK. The heart at the end does have a hitbox. First hit is grounded. Second and third hit is anti-air.

623A - 6 frames - Goes vertical the least, has the least amount of recovery, unsure of amount of invulnerability.

623B - 7 frames - Goes a little bit higher, unsure of amount of invulnerability.

623C - 9 frames - Reaches for the stars, unsure of amount of invulnerability.

421C - 30 frames - Furthest movement, can cross over at certain distances and whiff completely at close range.

The projectiles used from the Love Arcana of Arcana Heart.

A dive kick. Hits overhead. Air-stalls for a bit before diving. Can be useful for creating a double-overhead with the same timing as an overhead-into-low jump-in.

j.214B - 21 frames - Version that moves forward about half of Heart's character width before kicking.

Super version of Iron Fist Punch. Wallbounces on hit and can be picked up after it lands.

Super version of Special Kick. If the move whiffs, it produces a shockwave which hits low.

Heart shoots a bunch of love lasers. Equivalent to the Love Arcana eclipse from Arcana Heart. Likewise, it is a good combo tool.

Heart winds up and punches diagonally upwards. There are two versions, the double Iron Fist Punch version and the Arcana-infused version. The latter does more damage and requires you to spin the stick during the initial windup animation for it to take place. There seems to be no difference frame-wise between the two versions, aside from the Arcana-infused version giving the opponent more time to think about how they will punish you if it gets blocked, so you should probably always be spinning the stick.

On a close knockdown, start a homing dash and begin the mixup games. If the opponent is knocked down at a distance, you may want to fire a 22A projectile instead, and wait to see what the opponent does.

Yoishi (jump sealing) - Heart's strongest tool is her approach mixups against a grounded opponent. This assist, which prevents the opponent from jumping even when blocked, will allow Heart a decent amount of time to open the opponent up.

Henri or Franco (lockdown gunners) - These assists can be used in a more direct way than Yoishi, locking down the opponent while Heart initiates a homing mixup. They are also a useful combo extension tool.

Archived NPBlasterz-Wiki page from Jan-2017, which should be on version 1.09?