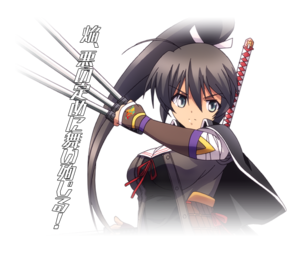 Homura
I sacrifice myself to the will of evil!

Introduction: She was originally affiliated with Hebijo Clandestine Girls' Academy but she is currently working as the leader of a renegade team, "Homura's Crimson Squad." She is full of emotion and has a straight personality when it comes to her friends. She respects and recognizes strength, even in her enemies.

Homura is based around a very simple yet effective concept: Very efficient buttons that lead into really high damage. Her movement is also fairly strong for how much range she has, and she also possesses an instant crossup that she can perform from a lot of situations.

Homura's walk speed is terribly slow, but her dash is quite fast, her backdash travels further than most, and her jumps, airdashes and rolls all cover respectable albeit unexceptional distance. She also recovers quite quickly after her j.236C, allowing her to travel pretty far into the air while still keeping her double jump.

Similar deal to 5A, doesn't chain into itself, hits low.

Similar to 5A, but with a larger cancel window; would be superior to it if not for proximity requirements. Jump cancelable.

Unlike a lot of Homura's moves, this button is actually pretty slow for it's range; it is, however, even on block, which combined with the fact that it moves you forward can allow you to go into jabs again from it for another string (just watch out for characters with 5F moves). It's also jump cancelable, affording you even more pressure options after it.

Big upwards swipe; can be used as anti-air, but generally outclassed by 6A. On counterhit, this allows you to cancel into her Aerial Rave moves; look at the Specials section for more info on that.

Large ground poke that's fairly safe to throw out, but doesn't lead to terrible reward at max range unless you have resources.

Big, slow claw swipe, even on block. Like 5C, this will allow cancelling into Aerial Rave moves on counterhit.

Absolutely humongous jump-in that plummets on air hit and gives great reward on a grounded one provided you have resources to extend with.

A small amount of Homura's moves (236C and 421C on hit, 623C on close hit, and 5C and E on counterhit) will, after connecting, darken the screen and put the opponent in a slowdown effect. During this time, you can then input A, B, or C to have Homura leap towards them, then continue to press them in order to perform a sequence of attacks followed by a finisher that differs depending on the button you use to enact it (A is a downwards Spiral that knocks down, B is a j.E that groundbounces, allowing for followups, and C is a j.236B that wallbounces, which can also be combo'd from). Confirming into this without the aid of an assist generally isn't happening, but it does at the least make 5C/5E frame traps much more rewarding.

Spirals forward, travelling straight ahead for the ground versions and in various directions during the air ones (A goes downward, C up, and B straight ahead again). The grounded ones all launch, and the C one on hit goes into a second attack that allows Aerial Rave followups. j.236A ground bounces, letting you combo into j.A, and j.236C recovers very quickly, allowing you to use it as a somewhat gimmicky movemement option. The ground versions are all quite minus on block, and the air ones have some landing recovery, so j.236A doesn't quite have divekick utility.

Dashes forward and swipes the opponent, with the A and B versions knocking them down behind you and the C one going into Aerial Rave. This is the aforementioned instant crossup: While the move does typically have crossup protection applied to it, this is for whatever reason ignored if it hits shortly after the opponent recovers from hit or blockstun, and the startup animation is quite subtle, making this kind of difficult to react to. Vanishing Guard blocks in both directions, which makes this not as good as it could be, but if you're forcing the opponent to always be Vanishing when you're close enough to them then they're left susceptible to throw, something Homura gets very strong reward off, and unlike with this move, she doesn't need an assist to convert or make it safe if unsuccessful.

DP time. A and C versions aren't full invuln, but the B one is. As mentioned above, the C version goes into Aerial Rave moves if it hits close by; you can combo into this from a very deep dash in button.

Spirals forward smilarly to 236X, and can then be followed up with consecutive spirals up to three times through inputting a direction plus a button, with Homura travelling in the direction specified. The final hit will change effects depending on the direction used; Moving downwards knocks down, horizontals wallbounce, going diagonally downwards groundbounces, and travelling upwards launches.

Souped-up 421X. Covers a lot of distance, but is pretty unsafe on block, so be careful about trying to snipe people with it.

The A ender is a downwards 236AB (lowest damage scaling), the B ender launches, and the C ender is a 623X (highest damage raw).

Starts with a circle of fire around Homura's legs that then becomes a tornado. Does about as much damage as you'd expect, and its startup is actually quite fast, so its easy to combo into assuming you can get them low and close enough.

If you're close enough, going into j.236A after j.E will hit them before they reach the ground, giving you the bounce and allowing for more damage and fullscreen carry. This isn't actually hard to acheive assuming you've forward jumped, which, combined with how strong the buttons involved are, makes Homura's air game very threatening.

This is written with "j.236A" specifically because trying to TK it often gets you a superjump, which makes this too slow to combo with; inputting the jump then the motion is much more consistent.

Standard corner confirm. You won't have time to link the 5A if you're too close when you spiral, so this might not work from shorter strings.

Midscreen throw confirm, which, again, gives you full carry. Doesn't work on Ouka, and there aren't really any substitutes that do outside of a simple >2D into j.E.

Real Ninja Damage, but only works on Saya, Muramasa, Saber and Sonico. It can also work on Ouka through going into 5B>j.A>j.B post-236A instead of the 5A link.

Frametrap into Aerial Rave combo. Not much more reward than the more standard routes, but thats still pretty good.

hold up to make it easiest

This isn't the best damage you can get off the crossup, and it can drop if you're point blank when you do it, but on the other hand Franco is one of the best assists for maintaining advantage if they block it, so she's still decent.

The damage becomes much better if you're in a situation (typically either a dash jab or j.236A being blocked) that allows you to cancel into Franco before doing the crossup and still get it (from a lot of strings, Franco will hit them before you can, activating the protection). This is also a decent way to get reward off 2C at longer ranges.

Kaigen is probably the best option for consistent strong crossup damage, giving you a good 6K+ meterless confirm from anywhere.

Cancelling DPs with the above two assists gives you your standard ,air-to-air conversions, which is actually pretty great all things considered.

Your most consistent way of comboing off the reversal super, even if Althea doesn't give much else.

This is possible anywhere you would usually do a more standard air combo assuming you're fairly low to the ground and haven't already used j.236A. Very high damage even off simpler confirms.

Big damage Lethal Blaze combo from Kaigen confirms. Won't work if they're not near the corner by the time Kaigen hits; for those situations, use throw, although that might still drop on the super from heavily prorated confirms.

A B C 2E Angelia 623C~BBBBB Kaigen 623C~xxx Angelia hits 421C AAAA meterless knock down. may not work at certain parts of the screen since angelia lazers do vary depending on positioning

Standard EB confirm from grounded strings. Demands you omit the j.236B in the corner, and won't work from heavily prorated confirms if you need to do the dash 5B (which is required if they're not very close to you or in the corner).

Simple but still very damaging Blast confirm from just about anything, regardless of proration.

rushdown and push buttons, fly around the screen with j.236C and airdash/escape roll