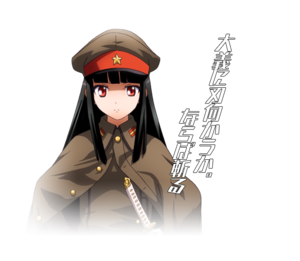 Kaigen Ishima
You dare go against justice? Then I will cut you down.

A war weteran who has overthrown the Japanese government of the Showa era. After establishing the dictatorship of "Immortal Empire of Tokyo" and appointing herself as its prime minister, she has proceeded to protect its national spirit from the Western culture.

Kaigen rushes forward and cuts down the opponent, putting them into a crumple state.