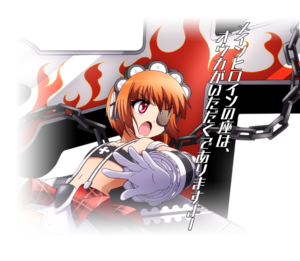 Ouka
I will be taking the main heroine throne.

Debuted in: OKSTYLE. Also, whatever this is, I guess.

Introduction: Nitroplus's former mascot character, the goth loli weapon of mass destruction, Exterminator Ouka! With the mysterious animal-esque Pandagawa by her side, she aims to reclaim her throne through some hard work and a little bit of elbow grease.

A character with huge damage, a huge arsenal of projectiles, and an even huger hitbox. She has a surprisingly quick dash for her size, a command float, a counter, rising overheads via j.C and her mid-float attacks, and more. However, keep in mind that her attacks can be sluggish and her size makes her an easy target to hit.

A low kick. Like Ein's, it's a standing low. It has short range, so you'll mainly use it out of a dash for pressure and oki. Its hitbox extends upwards a bit, so it can be used for certain combo pickups.

Ouka punches straight upward. A universal anti-air move, though its range is shorter than it looks. Also, unlike other characters' 6As, Ouka is only upper body invulnerable for a moment during startup. As an anti-air, you'll mostly use it by dashing underneath an opponent. It can hit grounded opponents at close range and also cancel from cl.B, but canceling into B from 6A will only get you st.B.

An upward swing using Ouka's claw. It has reasonably quick startup and a large, wide upward hitbox, making it usable as an antiair. Outside of that, it's useful for starting punish combos, pressure, and combo filler. Launches opponent on hit.

A lunging stab using Ouka's claw. It moves Ouka forward, making it a good long-range poke and approach tool. Serves as her primary grounded poke as well as one of her few combo tools that keeps the opponent grounded.

5C [Mid/Ground bounce] Limited Chain - Does not chain into 2C.

A downward cross slash using both of Ouka's claws. It has pretty short range and long recovery for a C move, so it's mainly used as a combo tool. Ground bounces the opponent on hit, allowing for followups. Keep in mind that given its slow startup, cl.B > 5C isn't a true blockstring and can be beaten out.

Ouka attacks by flying straight forward. Wall slams on hit. Its startup is slow, but the huge distance it travels gives it a lot of range. Primarily used for combos or surprise attacks. Can guard break if held for the maximum amount of time (though it will clash with Banishing Guard). It's also projectile invulnerable while moving, so it can be used to attack while slipping past projectiles. Can be special, super, and Escape cancelled.

A kick while crouching. Ouka's quickest normal, so use it to mash out of pressure at close range. 5A doesn't cancel into itself, so this works better as a pressure tool.

A rising headbutt. Ouka's 2B is unique in that it places her in midair. Since she can use jumping normals while in the air in this way, 2B is a great combo and pressure tool. However, 2B cannot chain into j.A. It looks like it'd be a good antiair at first glance, but it really isn't.

Ouka fires guns from her skirt while spinning forward. The attack is a damaging, multi-hit move that lasts an extremely long time. A good pressure tool that's hard to interrupt when cancelled from 5B that proves to be one of Ouka's main tools. Even if its blocked, Ouka can special or Escape cancel to maintain pressure. But she's wide open if it whiffs, so at least try to make them block it.

A slide. Slow startup, but very long range. Knocks down on hit and launches the opponent on counter hit. Lowers Ouka's body during the move, allowing her to low profile under projectiles. It's best to use the move on its own to approach or for surprise attacks - the startup is so slow that it can't combo from any normal besides CH st.B. Besides, it can still be special and Escape cancelled on block.

Ouka stabs sideways with her claw. It has decent range, making it a serviceable air-to-air or aerial poke. Its hitbox doesn't extend very far downward, making it not suited for jumpins. It's best to learn her j.B > j.A combo route.

Ouka fires a spiked ball diagonally towards the ground. It has long range and a big hitbox. Can be done as a rising overhead. Ouka's second major poking and mixup tool. It ground slams on hit, though, so there's not much you can follow up with. Also, if it hits the ground itself, the sparks flying around the point of impact will have hitboxes.

Like 5B, Ouka attacks by flying straight forward. Blows back on hit. Again, if you hold this move to the max, it will crush regular blocks (and clash with Banishing Guard). Also projectile invulnerable during the move, just like 5E. Can be special, super, or Escape cancelled.

A command normal usable in the air - Ouka fires a machine gun horizontally or at a downward angle, respectively. j.6C's bullets are reasonably fast and reach the edge of the screen, making the move serve as a poke as long as you don't expect much in terms of damage. j.2C works as a blockstring from 2B and can replace j.C in combos when you don't want a ground slam. Can be special or super cancelled.

Ouka fires multiple guided missiles. The differences between the ABC versions is probably... speed and power? (more testing needed). While they are guided missiles, by no means do they actively home in on an opponent. They're used less for combos and more for things like poking in neutral, ending blockstrings safely, pressuring opponents on wakeup, or catching air techs.

Additionally, flight mode gives Ouka access to a new set of air normals (explained below). They're useful for combos, blockstrings, and surprise attacks, as well as high/low or left/right mixups on wakeup. Also a useful followup for a blocked 5C.

A vernier-ignited kick at a downward angle. It shares its animation with her 5A, a low, so it's a useful mixup tool and a jumpin from High Speed Boot maneuvers.

Ouka swings up a spiked ball that launches the opponent upward. The attack has a wide hitbox underneath Ouka due to where the swing begins, but it also has long range above her. Sadly, given the state Ouka must be in to use this move, it's not usable as an antiair and is mostly restricted to combos.

Ouka swings down a spiked ball and then swings it back up. This attack has surprisingly long range and covers a large area, so it's a strong aerial poke. Launches opponents diagonally upward on hit. Keep in mind that it's a two hit move when cancelling in combos.

Ouka calls a laser fired from the sky. The button press determines the position of the laser, which all knock down on hit. It's a powerful special used for pokes, combos, ending blockstrings, and many more. You could consider the A version to be one of Ouka's most important specials, capable of making almost any normal (even 2C and 2E) safe on block. To make up for its power, there's a random chance that a Pandagawa will fall along with it, making it difficult to combo off of. The Pandagawa has a hitbox, so he'll often cut your combos short if you're not careful.

A counter move that activates when hit by either projectiles or physical attacks. The button press determines the length the shield is active. When struck, the opponent will be blown back. The blow back has startup, however, so your opponent may not get hit. If the counter hits, you can follow up with a super, partner call, or combo blast.

Ouka shouts and fires a missile at an upward angle. Launches the opponent upward on hit that allows for followups, so it's mainly used in combos. It's difficult to hit an opponent with it in neutral given its trajectory, but its startup is quick and the missile launches even if you're hit (verification required), so throwing it out as an anti-air can work even if you expect a trade.

Ouka fires a barrage of machine gun bullets straight horizontally. This super's angle is much easier to work with, making it easy to combo into while still getting solid damage. That said, it has zero invincibility and is almost impossible to combo off of given its amount of hits - in fact, it prorates so heavily that if the super doesn't hit cleanly, the opponent will likely float out and be able to air tech.

As a side note, it's possible to perform the air version of this super while rising - if done so, Ouka will keep the jump's momentum and slowly rise during the super, making it easier to score all of the hits.

Ouka rushes toward her opponent, grabs them, rises into the air, and piledrives them into ground. While spinning. An extremely damaging command grab and the main source of Ouka's damage. It can be avoided post-super flash by jumping, so it's hard to make the opponent fear it as a mixup, but it is invincible (Ouka's only invincible move!), so it works as a reversal or Vanishing Guard cancel. It can be comboed into, usually from a regular grab or Kaigen's assist. You can also squeeze more damage out of this move by Combo Blasting or calling an assist afterwards.

The 2-bar universal ranbu. Unlike other characters', Ouka's Variable Rush has her jump upwards during the first hit. The opponents are locked in for the duration of the super. It's possible to continue the super even if the opponent blocks it. Startup is invincible, so it's usable as a reversal.

Allows you to continue into an aerial combo.

The final hit is a tight link that deals a critical hit and huge damage if done correctly. Very difficult, more for swag than practicality.

Ouka flies into space and slams down a massive beam sword. It takes a while to start up, but it hits fullscreen. That said, its damage isn't particularly high given its meter costs - using three different supers will give you more damage overall. The biggest problem is that Ouka basically can't combo into it on her own, instead needing an assist to do so.

Crumples the opponent on air or ground hit. Easily combos with SPD, allowing you to get high damage for just a bar. It's also nice how she attacks almost immediately after being called.

It takes a long time before she can be used, but she can give Ouka the time she needs to activate Lethal Blaze by dragging downed opponents into the air, so the two work exceptionally well together. She really ups the reward on rising j.C mixups, for one. That'd be enough to make her a worthy choice, but Ouka can also use 623X to bring opponents back down and combo afterwards. She also hits pretty much immediately after being called.

A bit harder to combo into SPD with than Kaigen, but she has excellent combo potential otherwise and recovers quicker than the assists above. You don't need to change your routes much between her Paralyzer or Eliminator and it's relatively easy to combo into level 3 with her to boot.