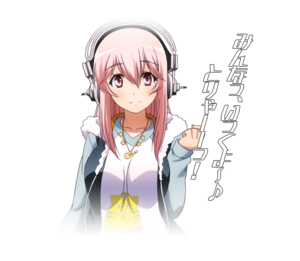 Debuted in: The 2006 Nitro Super Sonico concert, as the mascot

A university student who works as a gravure model and aspires to become a rock star. She performs as a member of the girl band "First Cosmic Velocity", being its guitarist and vocalist.

She is the main villain of Nitroplus in general, wishing to destroy everything that is good about it.

We are First Cosmic Velocity!

Sonico and her band start playing music, only going away when the round ends. They produce small items that can be picked up by both players.