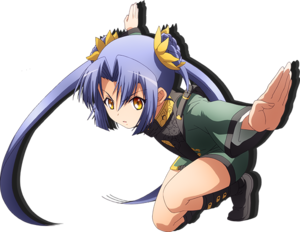 Ruili
Ruili wants to stay with her brother.

Debuted in: Kikokugai: The Cyber Slayer

Introduction: A female gynoid who was born from Cybernetics technology. The younger sister of Kong Taoluo, Kong Ruili's seperated soul was fused back together with an installed program and learned the Chinese art of Kenpo.

Ruili is a close-range focused character who has access to a ton of frame traps, a DP, and a very far-reaching 5D to give zoners trouble, as well as the second highest HP in the game.

Ruili is equipped with a step dash instead of a run, but its a fairly fast and far reaching one, and her 5D covers about half the screen, so she doesn't really have much trouble closing space. Her j.D has a very upwards arc, keeping her safe from anti-airs, so it can be good for feinting air approaches.

5D: Dash forward that can go through projectiles (like Saya's 236X mines)

236A has short range

Al and Anna only, crouching.

Good corner carry confirm for when you're nearby enough.

Confirm you can hit if you 6A someone fairly close.

Ruili can actually put the opponent in a crumple state from this specific Variable combination, letting you combo after. Also goes into corner routes if you're close enough.

Corner crouching route. You can go into 6A>air combo from the 5B to trade damage for a better knockdown.

Unlike midscreen, you can get actual damage without resources off the rekka overhead in the corner provided you don't cancel it from the other 214Xs. The 5B>236B can be inconsistent, just go into an air combo from the 5B if you're not confident.

Franco lets Ruili reset into another of her trap-filled strings, so she's a common pick.

A few assists let you combo from 623AB, but Althea's one that, like Franco, also lets you enable you pressure game. You need to delay the assist cancel slightly, otherwise Althea will appear on the wrong side.

Anti-air Tie shan confirm. The first 236 won't connect if you hit Saya at the top of one of her hideously floaty jumps.

For the aformentioned flesh-monster jumps. Can be kind of finnicky. If you're near enough to the corner you can instead EB on the first hit of 623C into 5B>236B for something more consistent.

Insta-EB confirm for when you want them to have literally no opportunity to burst well.

Ruili's good frame traps are the core of her offense: Her normals have healthy cancel windows on them, her strings can be very long, and 2B, while not actually plus, has small enough recovery for the gap to be deceiving. 5C is the button you ideally want to catch them with, since it'll combo into 236C on counterhit for real big damage, but other normals and 236C itself work well too.

If you cancel j.E into air roll after a corner knockdown, you can neutral jump immediately after and get a safejump if the opponent does not ground tech (try option selecting a jump cancel on j.E if you think they're going to high Vanish>jab).

Neutral jump, forward jump, or low airdash.Air to ground chain > low chain for corner carry > 236BAerial combo > j.E for knockdown. Neutral or forward jump j.E immediately following 2E or 236BRepeatedly attack the opponent with j.B or j.C as they rise, followed by 2A into either a throw or forward jump.Likewise, you can forward jump and immediately airdash in between your landings.After conditioning your opponent with IAD j.B and j.C on their wakeup, you should do an empty IAD 2A during your lands. If you jump over the opponent during these jumps on their wakeup, you can air backdash into j.B or j.C for a crossup.

Ground chain combo > 214B > 214CIf you use a brake to cancel the 214B while it’s still starting up, you can attack using the small gap created.After knocking down the opponent with a low, use your 214B overhead repeatedly on their wakeup.Adjust your timing of this attack, then wait for the opponent to guess your next attack.After 214B, can follow up with 2A or B+C for a low/throw mixup. Of course, there is a gap.Even if it works repeatedly, it is not advised to use this on every wakeup.Not a terribly risky option for opening up opponents.

You will want to approach the opponent with techniques like dash-up f.B or j.C. Once you’re in, use partners to keep your opponent under pressure or force the opponent to guess between your high/low mixup with 214B or 214C, then use a partner to keep these moves safe. While Ruili’s moves have good frame data, the range is short on them, so it is important to be aware of your spacing and the range of your opponent’s moves. If you don’t currently have a partner available, it is effective to try to get a life lead, then hang back while baiting attacks, waiting until your partner recovers and you can safely continue attacking.

Franco (Recommendation level: ★★★★★) A partner that is good for both beginners and advanced players. A simple but effective strategy is to dash up into f.B, then cancel into Franco whether the opponent was hit or they blocked, then forcing a 50/50 between 214B and 214C. It is also possible to make your 623x moves safe by canceling into Franco. This character is useful for various situations such as scoring a knockdown, extending blockstrings, and combo extension.

Kaigen (Recommendation level: ★★★★ ☆) The startup is a bit high, but the good thing about this partner is that she can lead to damage output that is comparable to other partners that seem stronger at first glance. This partner also very good at catching the opponent’s infinite blast and punishing it. When incorporating Kaigen into a combo, keep in mind that using her early in said combo will lead to better proration.

Henri (Recommendation level: ★★★★ ☆) The startup is not too high, and since the opponent's is stuck in place for a good bit of time, it is easy to force high/low 50/50s with this partner. She can also be used like Franco to help increase combo damage. Unlike Franco, it's hard to hit an opponent with a super, then have Henri continue the combo, although you can use an infinite blast if you want a similar effect. Keeping mind that Henri recovers faster when used raw than when she’s canceled into and the fact that she keeps the opponent blocking for a good amount of time it’s a good idea to use her on okizeme instead of always after an attack for a combo. That way, you’ll have more chances to use her in a single round.

Dragon (Recommendation level: ★★★ ☆☆) An exciting partner who can easily produce high damage. Cancel into dragon from 623AB, followed by a 5E to hit the opponent while they’re falling in order to get a high damage metered combo. If you want to use Dragon on the ground and have meter to spend, the easiest thing to do is to summon her raw, then do a variable rush (a fast route such as AACA) and forcing them to block it.