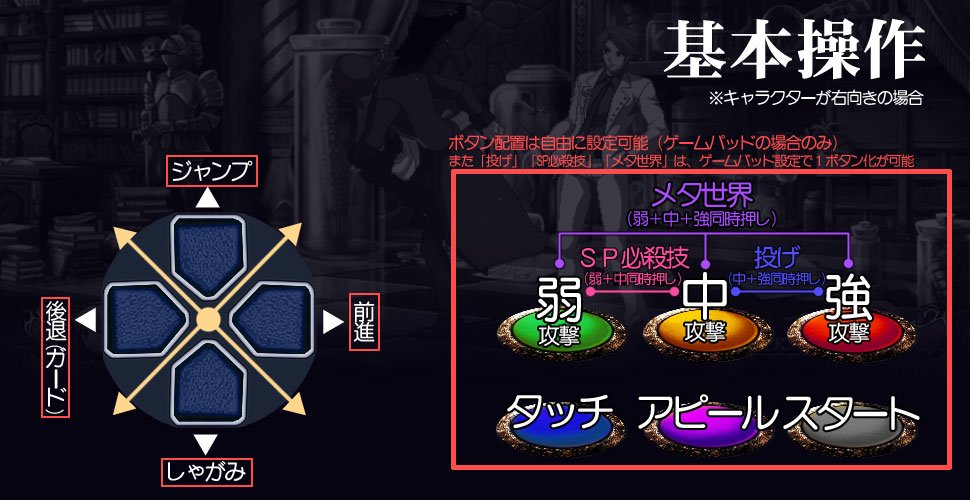 Attacks - A, B and C attacks often vary in start up, recovery, strength and reach. A attacks are usually quick but have poor reach and damage. C attacks have more reach and strength, but slow recovery and start up.

Touch - D is for the Touch mechanism. Touch revolves around switching places with your partner. There are various types of Touch that you can use in a match.

Appeal - E will cause your character to do a special taunt. During Appeal, you will recover a little bit of health.

SP Super - If you use A+B along with a special motion for your character, they will do a powered version of it for 1 stock from their SP Gauge.

Throw - B+C will let you throw your opponent when you are near them.

Metaworld - A+B+C will create the Metaworld. During Metaworld, both of your character's abilities will take effect on your active character and you can activate a special move that you can only use during this period of time.

Throw Tech - If you press the throw button, B+C, before being thrown with the correct timing you can perform a Throw Tech. This will allow you to escape being thrown.

Tech - When blown away by your opponent, you can Tech by pressing any attack button before hitting the ground. This will allow you to recover without being knocked down.