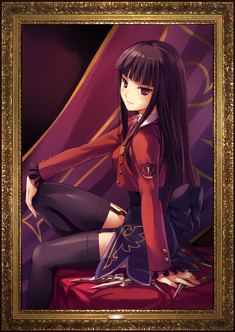 Lucifer is the eldest sister of the Seven Stakes of Purgatory, furniture belonging to the Game Master in Umineko no Naku Koro ni. Lucifer represents the sin of pride, and does it quite well. In Ougon Musou Kyoku, Lucifer fulfills her duties as the furniture of the Game Master, while finding time to compete and play with the other furniture.

Oldest of the seven purgatory sisters, Lucifer offers very fast and simple, beginner friendly gameplay for those who can keep up. She can get conversions from every range with her absurd neutral buttons, and her ability offers guaranteed easy damage. She also has access to some mixups with her overhead which can be spaced to be plus on block and combo'd on hit. She however struggles little against jumpers and her tools are one dimensional due to her some niche/useless specials.

Lucifer's ability is exactly what it's called - it's a free Attack Touch. It allows for very high damage combos without spending that many resources, simply by tagging Lucifer out or by entering the Meta World. Essentially it makes it so that Lucifer is almost always the character you want to have out, constantly building meter for her partner in the process.

It is worth mentioning that Attack Touch takes precedence over Touch Gauge - if it was already full, it will remain full and consume the ability. If it wasn't full, the ability will simply be consumed and the standard 8 second cooldown from Attack Touching will be placed, regardless of what the previous cooldown value was at. You could potentially do this to shorten how long your Touch Gauge is disabled from a Damage Touch (15 seconds) by entering the Meta World and Attack Touching off of any random hit.

Feel free to edit this part of the wiki with your tips/strats on how to best use Lucifer.

Feel free to edit this part of the wiki with your tips/strats what partners are best for Lucifer to use.

Factors in choosing Lucifer for your team

Extremely basic Meta World BnB that makes use of Lucifer's ability.
- (...) stands in for whatever combo that Lucifer's partner does, assuming it leaves the opponent grounded.

High execution combo that looks amazing and is surprisingly practical.
- Can be done anywhere in the screen.
- The j.9C j9.B must be timed close to the ground.

A variation of the high execution combo.
- Can be done anywhere on the screen.
- The f.5C must be timed at the max of distance of the Dash Cancel in order to connect.
- The j.9C j9.B must be timed close to the ground.

A corner-only variation of the high execution combo.
- xN can be done for as long as Meta World is active.

Another corner variation.
- The f.5C must be timed at the max of distance of the Dash Cancel in order to connect.
- xN can be done for as long as Meta World is active.