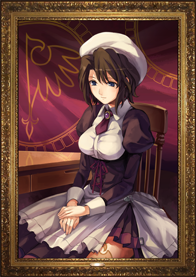 One of the two servants present at Rokkenjima at the time of the serial killings, the other being her "younger brother" Kanon. Due to her constant breaking of mirrors she has 1000 years of bad luck.

The big-hearted but sometimes clumsy maid of Ushiromiya mansion, she uses her clumsiness to her advantage in peculiar ways: Tripping to make plates fly, out of control food cart and clearing the floor make for unorthodox normals. Alongside that she does offers magic too, which she used for zoning and protective barrier which acts as great antiair and reversal. She can also summon seagull, which is a great oki- and neutral control tool. Her clumsiness sadly gives her almost no neutral presence with buttons, but if you can accept's Shannon quirks, she does as good job as expected from magical maid.

Auto-Guard - You will automatically guard for 15 seconds. This allows you to autoblock in the middle of dashes.

Variation of the BnB combo.

Overhead starter leading into Promised Lightning. Both hits of overhead should hit.

Can only be done near or at the corner. Loop combo leading to the meta super. 3C can replace 6C when in the corner.

Promised Lightning Loop. xN means can be done for as long as possible as long as opponent isn't stunned.