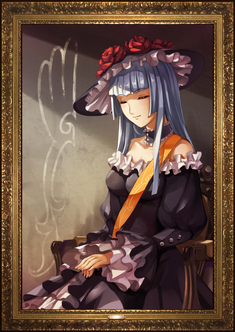 The former Endless Witch/Beatrice, and Beatrice's mentor who taught her all about magic. Although she dislikes how Beatrice uses the power she has been bestowed, Virgilia is nonetheless loyal to her student and works to help Beatrice achieve victory. From an anti-fantasy perspective, she is Kumasawa.

Former teacher of Golden Witch Beatrice has some similar aspects: They both share good zoning and corner game which can snowball to big damage. Virgilia has alot amazing SP specials for utility and damage, however struggles more with antiairs and true mixups than her pupil. She still offers some great, versatile zoning and damage to those who want more traditional, slow paced zoning to their team.

Brimful
Generates SP over time for both Virgilia and her teammate.

Virgilia's ability is one of the simpler ones in the game - just activate it and you passively get extra meter to spend. You don't build enough for a whole bar over its duration, but it's close enough to warrant trying to have it active as frequently as possible.

Whilst active, both characters generate SP at a rate of 0.07SP per second up to a maximum of 0.7SP over the entirety of its duration.

Feel free to edit this part of the wiki with your tips/strats on how to best use Virgilia.

Feel free to edit this part of the wiki with your tips/strats what partners are best for Virgilia to use.

Factors in choosing Virgilia for your team

Corner only. Neat little conversion off of 214A, racks up a lot of stun. You can either go for another Magic Circle setup at the end or tack on a little bit more damage with tk Spear, which still leaves you with enough time to land a meaty.

The meter-waster. Stuns most of the cast.

Corner variant of the anti-air combo.