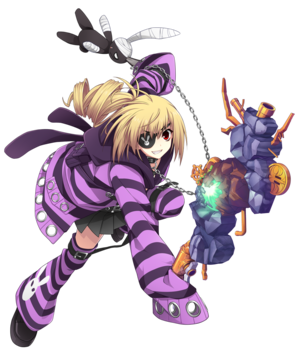 M suffers from amnesia and cannot recall anything from the past few months, not to mention her childhood. Phantom approached M and suggested that there was a way to regain her memories, but she rejected Phantom. Nevertheless, unable to deny violent urges she felt welling up from inside of her, M decided to become a duelist simply for the joy of fighting. Most duelists view M as a little more than a scavenger, as she has shown no qualms about targeting duelists who were already injured from a previous fight.