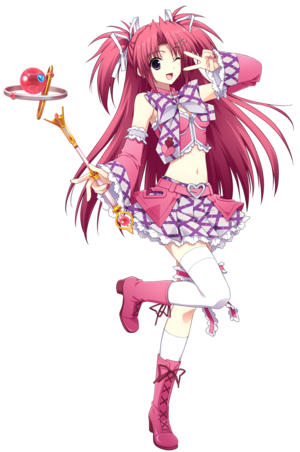 A top idol who got a job playing the role of a magical girl on a late-night TV show. Though she was initially a little reluctant about the whole thing, a letter from a fan with a terminal illness prompted Mei to approach her career with more enthusiasm. Mei agreed to Phantom's proposition because she wishes to cure that fan of their illness.

Mei is Zone specialist with an assortment of different projectile to enable her offense instead of keeping opponents at bay. Mei’s projectiles range from a cluster of small homing projectiles that covers her approaches or a large fire ball that can negate other projectiles to dominate fire ball war. When up close Mei has short normal and her mix up is not as strong compare to other. But Mei can condition opponent with 4L+S which frame traps into itself. When opponents try to GC or NA, Mei can mix up opponent timing. Mei DP has Mid Invulnerability making them weak reversal option but the attack has large untech time making them great combo tool.