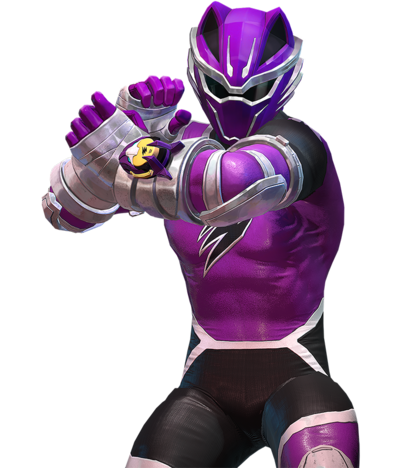 RJ was a mild mannered mathematician when he discovered that his father was a shark. Finding a mentor in the form of master swoop, he learned the power of bat martial arts, which he then combined with his passion for mathematics to become a wolf. This is referenced in his moveset like how his backdash is much worse than his forward dash, alluding to his fathers shark nature, and the fact that he shouts out move names like "wolfram alpha" and "iterate" referencing his love of math as well as providing sound for echolocation. He hopes to repair the morphin grid so that he can use his vast morphin energy to calculate new prime numbers.

RJ is a threat from any point on the screen. You can choose to play RJ aggressively, defensively, or anything in between. He has an extremely strong, well-rounded toolset and does good damage. You can choose to play him as basic or complex as you choose, his 5L kara dash pressure is an effective way to create solo pressure and mixups, but you can choose to play simpler and arguably be just as effective only using assists for pressure and mixups. He has solid defensive options in his 2H which has an excellent hitbox, and his EX which also has a really large hitbox but fairly long startup. He has excellent mobility with access to an excellent dash, j.S, and a combination of 4S~L and back dash for backwards movement. Overall, RJ is a great pick, although he may feel awkward due to long whiff animations.

5A is very fast, and because only the second hit causes flip-out it works as an anti-air that can lead into full combos. 2M has excellent range and low profiles a lot, so it is his go-to normal in neutral. On contact, it chains into 5H which can then be either chained into 5S4S, 2H (and 2H~M kara grab). 5H cancels into 5HH on whiff as well making it the generally safest option. Poking with 2M5HH can lead to huge reward since 5HH has armor and blows up punish attempts on whiffed 5H. 5S~4S can be a good full screen option, as the wheel will travel full screen and can blow through projectiles while giving a full combo on hit. It is extremely punishable on whiff, so sometimes 5S with no followup is a solid option to bait jump ins and punish accordingly with 2H or initiate a mixup on the opponent's landing frames. RJ's overheads are especially good for mix-up, he can make them work by mixing up with 2M, his only low, and 5LL negates all pushblocks. Combined with kara dash pressure from 5L, RJ keeps the opponent guessing with any blocked 5L. This is coupled with his throws being especially good, giving him combos regardless of direction and 5M and 2H kara throw moving RJ forward a fair bit. If you can find or create the time to charge 4[S], it's a very powerful tool. Not really for RJ himself, but it makes his assist into the most dominant neutral assist in the game, maintaining all of the properties of the normal version of 4[S] without going away after use.

tested as of version 2.3

This is the beginner RJ bnb. If you connect this with your own back to the corner, you'll have to dash before the 2M pickup after the opening 2M5HH. Most RJ combos are a variation of this, so newcomers may want to start here. It doesn't kill on its own, so a reset should be used first for a full health character.

1100 damage solo 0 meter starting BnB. To make this a bit easier, you can remove the "5L(1) > 5M > 5L(1) > 2L > 5MM" sequences and replace them with just "5L(1) > 5MM" or "2L > 5MM" which will lower the damage, but even with both swapped out this combo will do over 1k, making it still a TOD on most of the cast. You can also replace 5HH with 5S~4S which will also lower the damage slightly, but allow you to OTG from an opposite corner starting position with 2 plink dashes.

Conversion using Dog assist, makes picking up full screen hits much easier as it eliminates the need to plink dash, but dog assist will take away RJ's OTG bounce so you sacrifice some meter and damage doing this.

Conversion from RJ to Quantum Ranger while setting up 4S charge for the stronger assist. [Video Example]

RJ bnb that calls Jen in to keep the opponent juggled while RJ builds 4S charge, then finishes the combo with super

Goldar loop, the first hit of 5M has minimum hitstun and charged 4S wallbounces so this loop will work regardless of combo poration. You want to input the L for Goldar during the 4S animation. Additionally, you can dash out of 4[S] with 66 or L+M

Alternative Goldar loop that may be a bit easier, but it will drop at higher poration. You do not want to delay the followup on 5M, otherwise you might get Goldar stomp instead.

Dragonzord restand loop. You need to delay the 2Ms a bit. It can also be helpful to delay the 5Ms to ensure Dragonzord will be recovered by the time you call for the next stomp.