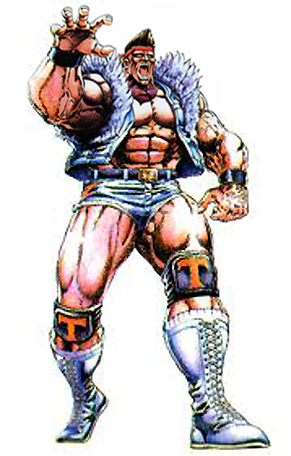 The bigger they are, the harder they hit!

A giant friendly doof hailing from Wigan, England, Tim was notably huge even as far back as elementary school, standing 6'3" after graduating. He enters the ring to fully utilize his gigantism, and have fun while doing so.

Titanic Tim is a big body character that has a dynamic playstyle based on his advantage in a given match; in mid-to-fullscreen neutral, Tim has the tools to wall out opponents and play defensively. After he gets his opponent in the corner, he transforms into a mix-up vortex machine with his high and low hitting normals, and easy confirms into knockdowns because of Ultra Round / Tsunami.

Unfortunately, Titanic Tim struggles if he himself is in the corner because of his large hurtboxes, mediocre frame-data and complete lack of a useful invincible reversal. If you're looking for a momentum-heavy, mix-up machine character that's also something of a big body bruiser, Tim might be up your alley.