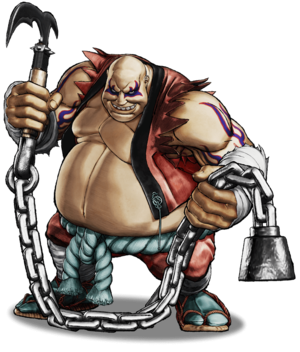 Earthquake has strong control over the mid-range, with many of his key pokes knocking down on hit. His dangerous ranged lows force the opponent to crouch-block often, restricting their movement. On top of that, he has reliable and strong punishment tools from any range, and a great WFT to boot.

Somewhat surprisingly for a character of his statue, Earthquake is also remarkably difficult to pin down, as he has access to a walljump, a teleport and even a weird pseudo-divekick that can alter his jump trajectory. His jumping normals are excellent, with j.C in particular being one of the most oppressive air-to-ground normals in the entire game. On the flipside, Earthquake has some of the worst ground movement among the cast, forcing him to play a much slower paced game than other characters. His normals are also slow to recover and easy to jump over, making mistakes very costly for him.

Fat Bomber is a neat little addition to Earthquake's moveset that has a surprising number of useful setups. It only deals around 140 damage, but it has good range, recovers quickly and gives you a knockdown, which EQ can build momentum off of.

Cancelling 5A into A Fat Chainsaw from tip range won't actually hit the opponent but it will move you into point blank range. Since Chainsaw recovers so quickly and because your opponent is probably looking for a block punish, you can sneak in a grab here. If your opponent knows about the setup, mix it up with B chainsaw.

From full screen, quickly whiff cancel 5A into B Chainsaw as a sort of pseudo-command dash. This will place you directly in front of the opponent - again, without actually hitting them. You can go into A chainsaw instead as a fake-out or into C chainsaw if you really wanna party (C Chainsaw is heavily punishable though - beware).

66C works a bit like Zangief's f.MK in Street Fighter V - It's a very active forward moving attack that's unsafe on block but quick to recover. Because its hitbox is so tall, it also catches people trying to jump over you quite reliably. Once they respect 66C, go for the command grab.

If you read the opponent's forward roll after a successfull Fat Bomber, do nothing and wait for your opponent to roll towards you. Rolls lose throw invulnerability on wakeup so you can do a meaty command throw and make them hate life.

Not recommended. A deep j.A or j.D leaves you at a very small amount of frame advantage on block. This is usually enough to beat jabs with your own n.5A or 5D but not enough to get a true command grab mixup. Simply jumping will beat both options.