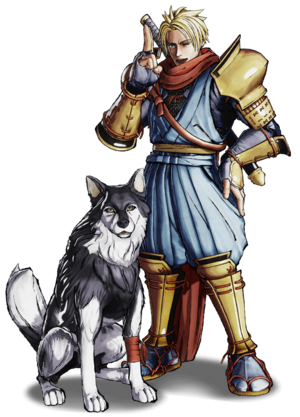 Poppy is used as a projectile to lock down opponents. The grounded Poppy specials work in contrast to Plasma Blade,as these specials are slower to start up, but give Galford frame advantage. All Poppy specials are available Armed and Disarmed.

Both Rush Dog (214A) and Machine Gun Dog (214B) have Poppy run along the ground and strike the opponent. Both moves are + on block, Machine Gun Dog more so, and do different actions on hit. On hit, Rush Dog knocks the opponent down or will do a special hit grab animation when in Rage. Machine Gun Dog on hit will grab the opponent, allowing Galford to do just about any follow up that he wants.

These are both important ways for Galford to score knockdowns.

It is important to know how Poppy moves and how she interacts with opponents attacks because those interactions affect whether or not you can use Poppy specials. Poppy needs to be behind and near to Galford and not knocked down to be available for attack.

Moves that hit near the ground will cause Poppy to yelp and and be knocked down. This leaves Galford without Poppy for several seconds.

Poppy's movement mostly mirrors Galford's movement. She will walk slowly forward or backward, matching the direction that Galford moves. Poppy will run after a slight delay, when Galford runs.

Poppy will do a back flip anytime Galford's center passes behind her head. Actions that trigger this movement include walking back (Poppy walks slower than Galford which causes the overlap), dashing back, jumping back, whiffing 5C, hitting 5B or 5C, and Imitate Replica on block and hit.

There are ways that you can avoid not having Poppy specials in certain situations.

Back dashing, jumping back, landing after imitate replica in the corner will stop Poppy from doing her back flip.

You can also intentionally use attacks or movement that lock Poppy into a back flip animation to set up back dash cancels.

For example, Galford can back dash first, putting Poppy into her back flip animation, run forward, and then back dash again. The second back dash, you will be able to cancel into a Poppy special.

Galford does not have a dragon punch to anti-air or a big obvious anti-air button like some characters in this game. Instead he has to use a handful of different tools to deal with jump-ins.

5K is his most obvious anti-air. Galford does an upwards angled kick, this is useful for anti airing deep jump in attacks.

Opponents may start to do earlier jump in attacks to call out certain anti-airs, which will beat 5K.

Arguably the strongest way to deal with jump in attacks by Galford is to dash away. Galford can re-position himself when his opponent jumps by dashing under them or back dashing.

Canceling back dash with a fire ball can even anti air a jumping opponent.

Air to Air attacks are another option that Galford has for anti-airs, with jump back j.C and j.D being notable examples that hit below and in front.

NOTE: Since version 1.11, this move cannot punish multi-hit attacks, make it not useful in most cases.

NOTE: If you are backturned, you can not Imitate Replica. This is especially notable after back throw.

Galford's okizeme and mixup is based around setting up Replica Dog (214C) either after a knock down or in neutral. Replica dog hits as a mid, catches characters mid-air, and also tracks forward/backward rolls, making it your go-to lock down move in most situations. Be wary, there are many ways to escape this move. Make sure you play with timings when calling Replica Dog, and mix in your other Poppy specials to make sure they respect you on the ground as well! After setting up Replica Dog, Galford has numerous mix up options. These include:

Galford can cross up his opponent with Replica attack. This mix-up becomes harder to react to when used in conjunction with replica dog, as replica dog will hit sooner than galford, but will still force the opponent to block cross-up if you change sides. This can be punished by dash throw/attack at a minimum, use with caution.

Galford can also apply a basic mixup game supported by Poppy. The more damaging and rewarding options are very high commitment options that will lead to severe punishes if they are blocked. You will most like to use them sparingly or mainly use relatively safe 2D pokes.