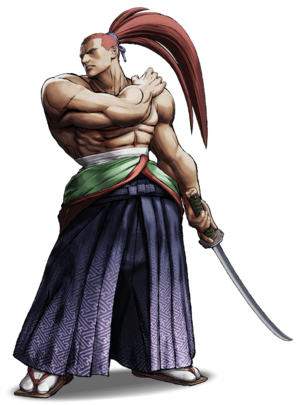 Haohmaru’s eternal rival and fan-favourite redhead Hitokiri, Genjuro is all about getting up-close and personal, forcing you into one of his numerous lethal mixups.While his range might be slightly below average, once he gets in, Genjuro has all the tools he needs to positively ruin your day. His hanafuda card projectile can put you in prolonged blockstun, allowing Genjuro to move in for a free mixup. His rekka strings can also hit from the front or from behind. On top of this, he has a command grab which he can use once the opponent freezes up.

Defensively, he is no slouch either, as his DP has pretty good invincibility and a large hitbox to boot. Genjuro players need to establish themselves in the neutral game against overly aggressive opponents since all of Genjuros mixups require the enemy to stay still more or less. Genjuro also struggles against heavy zoners, as he lacks a good anti-zoning tool.

If you are looking for an equivalent to Street Fighter’s Ken Masters in Samurai Shodown, Genjuro is your man.

Slash of a Hundred Demons

Combos as of version 1.70, use Numpad notation.