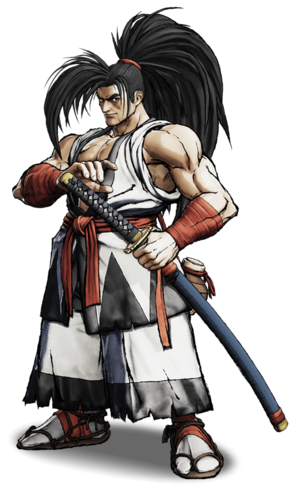 The original Samurai Spirit has mellowed out a little over the years, and while his notorious Heavy Slash might be a little more in line with the rest of the cast in SamSho 7, he still retains his hard hitting bait-and-punish playstyle, coupled with one of the very best normals in fighting game history.

Haohmaru has all the tools you might expect from a typical “Shotokan”-character. His Cyclone Slash projectile can be “faked” (think HDR Ryu) to bait the opponent into an ill-timed jump. He has two flavours of DP and a projectile-reflecting sake bottle that pulls double duty as a command overhead. Haohmaru makes good use of system mechanics as well, with tricky recoil cancel options on his key normals and a long-range WFT that can be comboed into from throws.

While Haohmaru can hold his own in just about any area of the game, he is generally outclassed by more specialized characters if they successfully force their game onto him. His limited arsenal of mixups also requires you to play fairly honest most of the time. Fortunately, Haohmaru reaps big rewards from winning the neutral game, so it’s all good.

Despite being the good old and goldy, he still have great buttons, one notable one is his 66A, being quite useful as anti air, and a poke. Abusing this button can suppress many characters without the best mobility or true invincible moves, they really need to respect this button if it's used continuously for pressure and find other ways in. Pressuring with the button can frustrate opponents to make big mistakes, throwing out big buttons and big recoveries. Use it with some neutral jumping and 2D for a rush down play style.
Strengths

Another good button is his far 5B, it's a great poke with great range. Can be used to play a game of keep out, can force character to jump in some cases.
Strengths

He can play a good old and oldy zoning style with his fireball and DP. The most obvious to just prompt people into jumping and anti-airing them with his DP (one of the best in the game). His fake fireball can be used to make things more interesting and safer.
Strengths

Haohmaru doesn't have the best tool for high and low mix up with he lacks a good low attack. A good way to pressure people on wake up as most of characters can is do a 66C (think that they will move on wake up) or do a grab, tick throw with 2D(think that they will block on wake up). Or just go stand on their face to do a 5C which has faster startup for either damage if they move, or for guard damage, and can recoil for bottle (214D) that is relative safe on block. Either way it's risky and may seem not worth it to Oki with Haoh, but it usually works if you condition your opponent to do something (e.g. someone likes to back dash or jump on wake up, use 66C to make them stay in place)
Note that if you are suspecting a dodge on wake up just delay your input a little or do 236D (a good move for baiting) to see what they do.

Another good thing to do is have a fireball hit meaty or go for a meaty normal.

Unless specified otherwise, these setups assume that you are buffering every whiffed normal/special so that it comes out on the earliest possible frame. Also every j.c safe jump setup doubles as a stance-break bait on their wakeup. Each setup has 2 stages after the Knockdown(KD). First stage is doing certain normals/specials to get close to the knockdowned opponent, and the second stage is the actual safe jump, where you have to read/guess which direction the opponent will roll(forward/back/no roll).