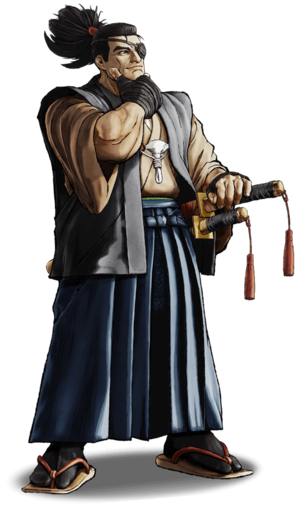 The legendary master of the Yagyū Shinkage-ryū style of swordsmanship, Yagyū Jubei is the middle-aged former samurai of the Tokugawa shogunate turned wandering ronin, seeking his own personal enlightenment. Armed with one eye, two swords, and three versions of his famous Mind’s Eye Sabre catch-counter, Jūbei is a defensive-oriented character that takes some real hardwork and guts to play effectively.

Jubei has a very fundamentals-heavy moveset, which force the enemy to play on his terms. His basic “poke into fireball” cancel is one of the better neutral tools in the game and makes it really hard for a lot of characters to establish their effective range against him. He’s remarkably safe on block for most of his moves while being able to deal significant amounts of chip damage, forcing opponents to take action against him.

If the enemy becomes too predictable with their offense, Jubei can utilize his set of counters to deal up to 45% on a good read. His quick dash and large hitbox on 66C makes it difficult for the enemy to approach him as well. On top of all that, Jubei has great, fast jumping buttons that can be used to catch opponents air-to-air.

With so many great defensive options, it should be no surprise that Jubei’s offense is… passable at best. He lacks a real mixup, outside of universal overheads and run-up throw. His moves are also somewhat finicky in their application, which makes him one of the more challenging characters to pick up, despite his seemingly basic playstyle.

Poke with 2B and 5B and zone with fireballs. If you think they're going to try to jump over your fireball you can preemptively do j.A and j.B to reset to neutral; or if you have the big brain reads you can do the jump in parry.

Although Jubei's Okizeme is extremely simple it is still effective, allowing for some pretty big damage if you condition your opponent. Jubei's main mixup on Oki is UOH and 2C, both of which knockdown allowing for another Oki situation however both are punishable on block but on a correct guess 2C can do a grip of damage. At this point when you have your opponent fearing the UOH and 2C you can mix in grabs or catch an opponent trying to disrespect you with a DP or reversal.