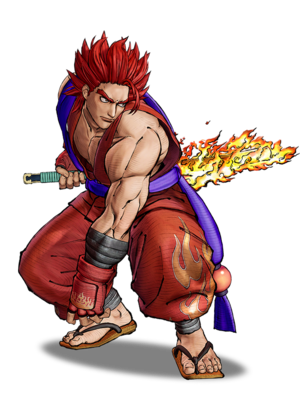 In spirit, Kazuki hearkens back to his incarnation in Samurai Shodown V Special, having good movement speed, a fairly decent poking game, high damage with the right resources, and a powerful air game, as well as a few funny tricks in his back pocket. His transition over to this game has given him some improved ground normals, a very fast and semi-flexible WFT, and a great boost to his damage potential in Rage, making him a great character for fighting up close or even a little bit at midrange if you counterpoke well.

However, Kazuki still has a lot of the same weaknesses from VSP, too. If he's kept out of close range and doesn't have fireball charges, he has a fairly weak fireball game, and he's still a relatively close-range character. Though he can still do great damage without having fireball charges stocked, he's still dependent on them for some of his best damage, and almost all his special moves, while powerful, tend to be unsafe on block.

Kazuki tends to play a sort of in-and-out game, but mostly prefers close range. When he's up close, n.5A, n.2A, and n.5B are all relatively oppressive tools that convert into 623S on hit, giving him a knockdown and time to charge a fireball with 214K. Since it moves him forward, his 5D can be used to annoy people much like Charlotte's can, but can also be canceled into special moves; a classic Kazuki gimmick is going into 421S after 5D in order to catch an opponent trying to mash out on you. He can also get a charge off of his 6D, though it being a bit slower makes this somewhat rare.

Kazuki also has excellent conversion options from throw; when at midscreen or even if he pushes the opponent to the corner, he can get a 66B and convert into 623S, or even into a longer combo provided he has level 2 fireball charge.