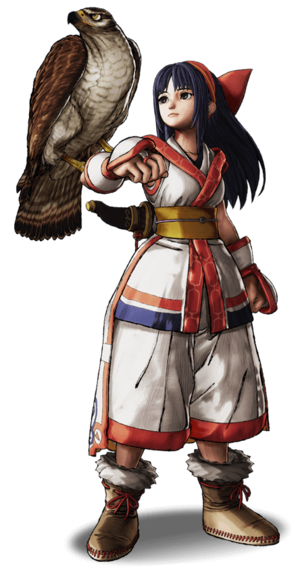 Nakoruru has adjusted well to the new system, and with walkspeeds being universally slowed down across the cast in SamSho7, Nako’s focus on movement, paired with her hit-and-run playstyle and strong whiff punishment tools from a range make her positively stand out in the neutral game.

Nakoruru mainly plays a passive-aggressive game from just outside footsies range, where she has a variety of tools to react to her enemy’s movements. She has great anti-airs and a very annoying “projectile” in Mamahaha, that can lock down the enemy from a distance. Her short stature also makes her very hard to instant-overhead for some characters. On the other hand, Nakoruru’s normals are quite stubby, meaning she needs to create opportunities for herself to move in and deal damage. Her approach - while powerful - is also highly unsafe on block and requires the player to carefully gauge the opponent’s tendencies or else risk eating a huge punish.

Most of your damage will come from Nakoruru's fast pokes and whiff punishing with her specials, but when it comes to combos it revolves around her 5B, which is special cancellable both in its near and far versions.
Landing either 5B lets you 236C for maximum damage, even outside of Rage. This is not possible with any other special cancellable starter and does more damage with Rage enhancement than even raw 5Cs in Rage.
However, this comes with the same caveat as other characters with rising specials: The 236S moves are extremely unsafe (SSM punishable at worst) on block and whiff. If you are uncertain about your confirms in a particular match, you can end your combos with the grounded 412S moves. In Rage, 5B 412C combos properly as well.

Hard to confirm, but does combo. Less damage than B starter.

Only from deep j.C obviously

Unarmed combo (from j.D) for knock down.

For slightly less damage, but knockdown and corner carry.

Throw scaling makes n.5C do less damage than this with no knockdown if you end up too close to the opponent after your throw, so be mindful of your spacing.