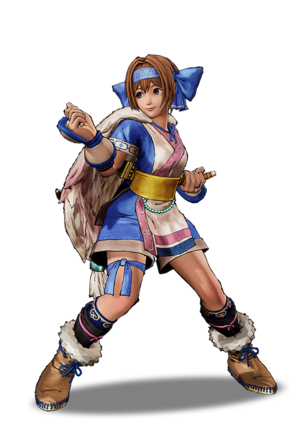 Nakoruru's little sister who goes on a quest, for the 7th time, to tell her she left the stove on when she left. In her transition from SamSho 5 Special, she kept her specials but lost some important aspects of her gameplan: no more 236C crossups, pursuit combos, seizure-inducing WFT, etc. Nevertheless, she still plays a very different game compared to the rest of the cast and excels and frustrating and pissing off her opponents. And that's all that matters in the end. :)

The main goal while playing Rimu is to score a knockdown and set up platform oki to run mixups. She is particularly effective in the corner so taking your opponents there is a big priority. The best way to do this is to always cancel any B slash into 214C which blows back on hit. Moves like 623S, 241S (1st hit) have bigger blowback but feature very long recovery as a trade off.

Rimu is a swiss-army knife of specials but her normals lack range, so it's usually best to wait for your opponent to start making a move. If they approach from the ground, 5BC is your longest-reaching poke and has very fast startup. At fullscreen, 236C might condition opponents to jump forward which you can answer with a j.C to the face. If they're prone to jump-ins, use any of your several anti-airs (623S, 214A, 66C, etc.). If you want to get in, j.D has short startup and is active for a very long time. Although, it does little damage but will stuff several air normals or A/B DP startups. j.B can be linked for big damage but its horizontal hitbox can whiff easily on standing opponents, so time it properly.

A big part of Rimu's neutral is j.2S. You can jump in any direction after successfully setting up a platform. Ice platform is helpful to take some heat off from projectile spam or to force opponents to make a move. Opponents who DP, will trade with the ice block but you can pre-emptively neutral jump or approach with a well-timed forward j.D. Additionally, setting up the ice block right on top of them will force a run in any direction or to eat up a free mixup on taller characters (on wakeup). Condition your opponent into thinking you'll set up a platform on neutral and then anti-air when they guess wrong.

Important: Rimu can only use 1 ice special at any given time. So for example, if 236C is still active and the enemy jumps over it, you cannot DP immediately after.

Rimu mains live for corner oki. Always set up a low-profiling ice platform expecting a forward roll with either backdash or overhead kara cancel. From there you can:

Comboing into either 623S or 214C will push the opponent deeper into corner, allowing you to repeat the cycle. If they DP with heavy slash, bait with an air platform or wait for them to land and backthrow 2C.

You can also setup SSM from a back-hitting 236A on forward roll. This is a bit more situational but it's one of the few reliable ways to land it.

-> f.5C (Most damage if you don't want to microstep, but provides no knockdown)

->f.5B > WFT (Best damage, can be punished by rage explosion)

-> n.2B -> 623S (Nets a lot of damage overall without resources from a jump-in. May need to substitute far B if opponent is slightly too far)

-> 5C (if you're not confident of being in the range of your B buttons, this can be a decent alternative but not recommended for general use)

Note: The ice toss you use doesn't matter, but the point is how to confirm if you see them get hit.

-> 66C (In a pinch this is reliable due to it's speed, but not recommended when you're confident in confirming)