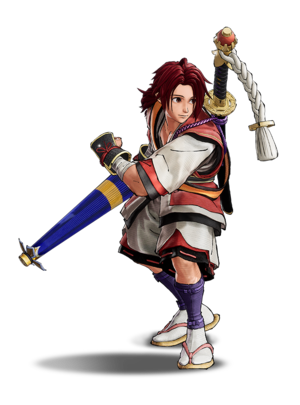 Shizumaru is a well-rounded, technical fighter who can play offense and defense equally well. His range is slightly shorter than most of the other characters, but he makes it up with high damage, great mobility and strong defense. While Shizu can be played at any level and do well, he has arguably one of the highest skill ceilings out of any character in the game due to his instant overhead setup and Crazy Downpour special move (also called Kyourakuzan or KRZ, or TAP as a reference to the signature move from Boxer from the Street Fighter Series, the Turn-Around Punch). Holding down any slash button (A, B, C) will charge the attack, with the strongest version taking a full 80 seconds to charge up. Experienced players will switch which button is held down regularly. Reading the situation correctly and changing your buttons on the fly is a big part of Shizu’s execution requirement. But the reward of landing KRZ is massive, and it makes his damage potential some of the highest in the entire game after the first round. He may feel a little outmatched on the ground sometimes, but if you slip up once, Shizu might just take the round from a single small mistake.

Shizumaru ground game is decent, with 5A as fast poke to stop opponent dashing, 66D as safe approaching tool, and far 5C as whiff punish tool. His anti-air options are not very strong, it's better to use jump C for air to air or 66D to dodge under jump attacks. He has more advantages in the air, jump C has a great hitbox, and jump B hits cross-up exceptionally well, combines with his floating ability to bait out anti-air, and floating BC for surprise attack. His projectile game is awesome too, 236S has great recovery time and 236D reflects most projectiles, and his SSM is deadly against anyone trying to play fireball game. He has wake up invincible move, but it's fairly slow so don't use it against meaty jump attacks.

Shizumaru has quite a few tools for wake up mix up, including 2C / BC / 44 8S 2A combs / 44 8S BC, making him very strong against wake up, especially against forward roll.

When playing as Shizumaru, you need to get into the habit of holding down any Slash button (A, B or C) at all points during the match to charge KRZ. This move is your biggest joker and enables you to blow through anything the opponent does, doing a huge amount of unburstable damage. This gives you great comeback potential or a way to close out a round or match before the opponent can use their rage explosion. Because of the huge threat this move possesses, your opponent might hesitate to attack or even scare to jump, giving you more opportunities to win.

To charge KRZ, you don't have to stick to a single button - you can switch around buttons and still keep the charge, as long as at least one slash button is held down at all times. Because of the nature of holding down a button, you won't have access to certain moves in the neutral game. Apart from the obvious normals and specials, these are:

It helps to think of charging KRZ as a stance. Holding C is the defensive/neutral stance - you have access to quick normals to halt your opponent's approach, and you can deflect and spot dodge, but you lack the access to a quick whiff punish tool 5C and cannot use throw, as well as main combo part and reversal 623C, WFT and SSM. Holding A is the offensive stance - you can't do quick pokes or cannot deflect or spot dodge, but you can deal heavy damage with 5C and throw. Holding B has quite a few disadvantages, most notably you cannot use your main combo tool including near 5B / 66B / 2B and cross-up jump B.

A good habit to get into is to never press and let go of a button but instead always holding it down. Even if you do not intend to keep holding it down, it gives you the option to choose. So if you're holding A, and then pressed C to poke/punish with Heavy Slash, keep holding down both buttons until you made up your mind which button you want to free up.

Other good ways and spots to switch the button you're currently holding is during the recovery of any move (mostly specials such as DP after a punish) or by masking it with a 2D (eg hold A, whiff 2D, switch to holding C).

It's important to always have a plan as to why you're holding which button. For example, holding A or B keeps you from using deflect, so in situations where you're soon likely to be able to land one, you want to plan ahead and free it up in time.

Concrete example: You're holding A and attempt to hit the opponent with a 5C, but it was blocked. If you kept holding A here, you're not able to recoil cancel into deflect and are defenseless against attempts by the opponent to punish with a Slash of their own. Instead, you want to hold A, press 5C and keep holding C, and if it was blocked, you can attempt to deflect. In case you're deciding to deflect, always switch back to holding A after deflecting (ie doing 236[A]+B and holding A), because if the deflect was successful you want your C button to be free up for SSM.

Think of different situations where you want to switch buttons around like this and incorporate these drills into your practice sessions!

Lv1, Lv2 and Lv3 KRZ are fairly useless, which is good because it lets us focus on the two important ones: Lv4 and Lv5. These are probably the only ones you want to use. Let's compare these two: Lv5 takes four times as long to charge compared to Lv4 (80s vs 20s, or 50 Samsho seconds vs ~13 Samsho seconds) while only adding a fraction of the damage, so Lv4 has a way better damage to charge time ratio. Lv5 however is of course completely invincible, whereas Lv4's invincibility runs out before the start up frames.

This means that if you can land Lv4 KRZ as soon as you get it, you will do a lot more damage over the course of a match than landing a single Lv5 KRZ. This makes his throw very potent, as KRZ can easily combo from it. However, reliably landing Lv4 every time after exactly 20s is unrealistic, and every second you "waste" after you get Lv4 makes you lose on DPS, which makes waiting for access to Lv5 KRZ more attractive. After all, which version you prefer to use is up to your playstyle. With that being said, closing out the first round (or second if you lost the first one and whiffed a KRZ already) by using a guaranteed Lv4 is probably always worth it, so don't hesitate to use it this way.

As said above, only Lv4 and Lv5 are worth using. There are two magic numbers that you need to memorize - 13 and 50. This is the amount of in-game time needed to charge to Lv4 and Lv5. ALWAYS keep track of the round timer to determine which level you are currently on. In the first round, assuming nothing stops the timer (like Rage Explosion), you have Lv4 as soon as the timer reaches 47 and Lv5 as soon as it reaches 10. If either of you dies when the timer shows 24, that means 36 Samsho seconds have passed, so you'll have Lv5 in the next round when the timer hits 46. Utilizing the timer to determine your current charge level is a very simple but powerful technique, and nothing feels more satisfying than to go through a fireball right as you hit that Lv5. Get into this habit as soon as possible.