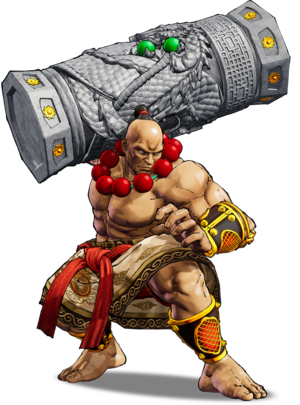 Wan-Fu makes his triumphant return to Samurai Shodown, ready to show off his great Chinese power. With his SamSho II physique and a fancy new pillar to match, Wan-Fu is as hardy as he looks, being able to scramble you with or without his weapon in hand. With the pillar, he comes packed with high-damage combos and pillar tosses which all leave him plus on block, including a crossup variant. When unarmed, Wan-Fu gains access to a quick, far-reaching command grab and heavy punches, which enable him to continue his momentum with a simple-but-effective strike/throw mixup while away from his weapon. In concept, Wan-Fu plays an explosive offense that flows between having turn-stealing pillar throws and hard-hitting grapples.

However, his strong vortex ability comes at the cost of his neutral game, with his pillar only reaching so far and his fists even less so. Against characters who can keep him out effortlessly, Wan-Fu must often bet on a pillar throw or similar risks to score a knockdown, let alone make it into close range. If that fails, there's not much an unarmed Wan-Fu can do but soldier on.

Wan-Fu has a few important tools here that he lacks without his weapon - namely recoil cancels, pillar tosses and better anti-airs. 5B and 66B are your best options to recoil stuff into, and in neutral Wan-Fu ideally wants to be within range to connect these. His light pillar swing is a relatively safe RC option, but Wan-Fu can also recoil cancel into one of his pillar tosses as a wager to win neutral. In addition to giving him a high profile, the resulting explosion of these pillar tosses grants Wan-Fu plenty of advantage on block, giving him time to start his unarmed mixup game. The heavy pillar toss is particularly useful, as Wan-Fu has the potential to sneak in some dirty crossups (e.g. spacing the toss so the pillar will hit mid-air while Wan-Fu is flying in front of them, then explode while he's landing behind them). Keep an eye on where each toss will make the pillar land, in addition to considering where your opponent will be upon the explosion. A knowledgeable opponent will use backdashes to escape the range of your heavy pillar toss and punish your landing if it whiffs, so don't just throw it out randomly. For all of your pillar tosses, 5B range gives you the most flexibility when choosing which pillar to throw.

If you score a knockdown, then Wan-Fu has a decent vortex game with standard tools such as running kicks and overheads timed and spaced to cover both front and neutral wakeups. A weird quirk with his overhead when armed is that it doesn't knock down, but can be linked into a light combo if it hits late enough. If you're feeling lucky, you can also go for his 2C, his pillar sweep, which knocks down and does a good amount of damage all at the cost of having heavy recoil (read: free damage for opponents with far B combos). Even riskier is his 66C, which has a surprisingly high hitbox for catching jumpers but doesn't even recoil. Finally, the aforementioned heavy pillar toss is great for his vortex but requires good spacing.

While he's still got his pillar, Wan-Fu has decent anti-air options. Though he has a DP, only the Rage version is invincible on startup - however, his heavy DP has some upper-body invuln. His pillar swings also serve as a far anti-air if needs be. As both of these are situational (his DP's hitboxes are very narrow), Wan-Fu often relies on his air-to-airs to swat opponents out of the air, with his far B in particular reaching far enough that Wan-Fu can air-to-air at a reasonable distance. The drawback to these is that they come out slow and will often get beat by other air normals. Wan-Fu usually has to start his jumping slashes early, but it is possible for opponents to catch on to this.

Wan-Fu's last line of air defense is his jumping pillar toss. This is Wan-Fu's best anti-air option by far thanks to its great big hitbox and its active frames even if Wan-Fu gets hit after it has come out (the pillar won't leave his hands if he is hit during startup, however). Another important property of this move is that Wan-Fu bounces back after throwing the pillar, travelling further back the higher he throws it. Given the slight pause as he throws it, this can also be used to bait an anti-air Issen if timed right (if your opponent isn't expecting it, that is - if they are, well aren't you fucked).

After losing the pillar, Wan-Fu shifts gears into a new playstyle. Unlike most characters when unarmed, Wan-Fu retains a lot of basic tools that allow him to function reasonably well, including crossups, a great overhead, strong meaties and a command grab. However, his lack of range when armed is compounded here and he struggles even harder against strong zoners like Mina - while his pillar at least gives him one shot to break through their defense, here he can only play patiently, walking forward and JD'ing his way through. Also keep in mind that you can't Rage Explode while unarmed.

When you're up close, you have quite a few options. As a grappler, opponents will naturally fear your four-frame, long-reaching, hard-hitting command grab, and SamSho's one-frame jumps, backdashes and dodges make it easy to avoid. Luckily, you have your trusty heavy punch for just the occasion. The standing version is what you'll want to use, as it reaches higher than when crouching and it always knocks down on hit. Not only does its great range catch both jumpers and backdashers, but it's quick enough that you actually recover two frames quicker than a dodge on the same frame (when done meaty enough, this practically guarantees a command grab against a dodge). Failing that, his jumping heavy punch will always knock down an airborne opponent and it also does a decent amount of damage. Regarding the command grab itself, your best options to tick into it are 2S and 2D - two of either from point blank will still leave you with enough range to land the command grab, assuming they don't jump out.

Wan-Fu still retains a basic-but-effective vortex without his weapon. His unarmed overhead knocks down on hit, so there is no longer a need to space this to connect a link combo. Furthermore, its high profile means that this can also catch jumpers. Be careful with landing this meaty all the time though, as some opponents can use the pre-animation invuln of SSMs to punish you hard. Aside from that, Wan-Fu also keeps his running kick for the vortex and his 6D as a much safer meaty option.

While the unarmed state has its own set of advantages, its main drawback is that its burst damage simply doesn't compare to what Wan-Fu is capable of with his weapon, especially when combos are thrown into the mix. This is your main incentive for retrieving your pillar, along with all the other boons that holding a weapon grants you.