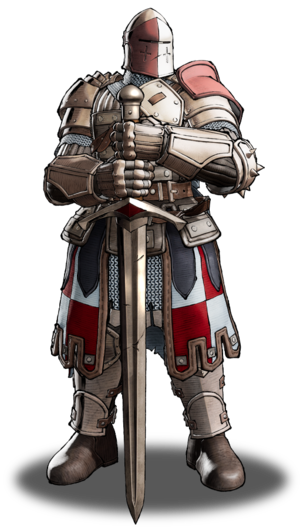 As a guest character from the game series For Honor, Warden is here to challenge you to a fight of life and death in defense of his loyalty to his home country.

He is pretty well adapted to the game with his amazing aerial attacks as most of the characters in the game rely on. He depends on his short jumps to apply constant pressure from the air, and to test the patience of his opponent to block the attack or the ability for them to anti air him. His j.A and j.B are great moves for air to air so he doesn't struggle too much with other characters with amazing aerials.

Aside from his jumps, his unique move set of command normals are useful for a mix of his own. His stand mediums, near heavy and dashing medium are able to follow up with another move that is an overhead, it will mostly hit if the opponent tries to move. But he do not have to go for an overhead but can follow up with his long reaching 2C for a low or set up for a grab. This ability makes him one of the strong mix-up characters of the game. As one of the few characters with a command parry, his is one of the easy ones to use but it does require a certain knowledge for follow up attack, as it doesn't automatically follow up with attacks.

Overall, you will found yourself playing him for big damage and easy inputs. His mix requires some practice to be used at its full potential. Though he might struggle to get in on some character but he's a strong well balanced guy that you would like to try out (especially if you are a fan of For Honor).

Warden can pressure, with his shallow hop and his big buttons.

The basic idea of his neutral is his j.B and j.C, most characters that lack a good anti air is hard to get around being pressured by j.C, and his j.B is an amazing air to air, or even use j.A to prevent people from jumping higher than him. Something to do, j.C pressure, suddenly empty jump and grab. His 2C has amazing range to use as a punish or mix-up.

His parry is also a good one, it reflects projectiles and parry air normals, the follow up has to be done manually, see the combo section for more info.

His UOH has amazing range making it hard to punish at long range. You may use your jump with a button or no button to pressure a wake up or to bait out stuff.