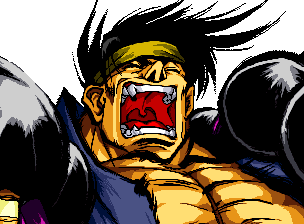 Gaira’s illustrious college football career came to a grinding halt when he accidentally killed someone during a game. He was expelled and sent to serve as a monk at a local Buddhist shrine in the hopes that he would learn to control his temper. He didn’t.

Gaira is the boisterous nephew of Samurai Shodown 2 veteran Nicotine Caffeine. He uses his large stature, the strength that comes with it, free guard cancels, and huge normals with surprising speed to pummel, grapple, and SHOUT his opponents into submission.

Slash Gaira could be classified as a more 'mixup' oriented incarnation, for lack of a better descriptor. He boasts an incredible anti-air grab, two threatening hitgrabs that form a high/low mixup at close range, and an all purpose shoulder tackle that provides corner carry and makes his punishes seriously hurt. This versatile toolkit lends itself to conditioning the opponent to block a certain way and hurting them for it. A lot.

Bust Gaira is all grappler, all the time, mixups be damned. He gains a 236S series that keeps him close to the opponent and counterpokes like nobody's business, but his command throw is the star of the show. It cashes in hard on unjumpable setups, can combo on hit AND block, and it’s one of the best guard cancels a monk could ask for. He wants nothing more than to be in his opponent's face and hammer toss them to the ends of feudal Japan.

The second hit of Gaira’s 5D has a tendency to miss on several crouching characters and only being able to hit up close on others.
5D will completely whiff on crouching: Nakoruru and Rimururu.
5D will hit if spaced on: Gaira, Ukyo, Amakusa, and Zankuro
The second hit of 5D will whiff up close on: Genjuro, Shizumaru, Galford, Ukyo, and Hanzo.
Both hits of 5D will hit on: Basara, Haohmaru, Gaira, Kyoshiro, Amakusa, and Zankuro.

Slash has the more consistent combo game of the Techniques, and uses this to his full advantage. Any punish into 623S will deal great damage, and thanks to this Slash also has easier access to stuns, making his strong punishes a lot more dangerous. 421S is also an incredible set of tools, giving you one of the best anti airs in the game, an overhead that avoids throws and lows, and an incredibly fast knockdown low option. He's fairly honest in this Technique, if your definition of honesty includes constant mixups.

-421B can be used as a guard cancel vs Amakusa or Basara to negate their 2D pressure thanks to its low invincibility, or against command throw blockstrings in general thanks to its throw invincibility. 421A is great vs characters that have strong air options and normals such as Bust Shizumaru, Ukyo, and Basara, and really just good against anyone with a particularly itchy trigger finger for jumping. 421C, if all else fails, will almost certainly connect as a guard cancel before they recover -- it's REALLY fast.

-421B/421C theoretically forms a 50/50 after a blocked non-recoiling button (n.2B/5D/6D) in the vein of an unjumpable Enshin Satsu setup, but they don't combo, so your opponent has to correctly block the button, and then incorrectly block the followup. You're better off just directly using them on the opponent's wakeup or otherwise trying your luck with some other oki. 421C's huge active window is a nice bonus for this.

Bust focuses solely on getting in the opponents face, and keeping them still long enough in neutral to do it. Make ample use of 22AB, 214A, and anti airing with 236S to keep them grounded and blocking. When you do finally get in, pester them with your cancellable normals to land your command grab.

Once you do land either Enshin Satsu grab, you can set up an easy unjumpable. After landing the grab, simply run behind them and cancel n.2B into 2146CD. Timed right, this guarantees yet another 2146CD, looping into itself once again. Or you could abuse Enshin Satsu Chi's three whole active frames and directly meaty them with it during the unjumpable frame.

-236C as a movement tool (it's very good at moving you in, might we add) can also corpsehop, if you want to look cool about your oki.

-n.2B and 5D/6D are how you get your throw combos/tick throws, since they all can be cancelled on block. n.2B is the best case scenario, but it requires close proximity and is the slowest. 5D whiffs on certain crouchers at some distances and only cancels on the first hit, but is much faster. 6D is basically a n.2B with no distance requirement, but it's still pretty slow and stubby.

-Enshin Satsu Chi is very powerful when using it after a crossunder anti air as well. Run under them, 66A, and time the command grab. Since they’re stuck in the backturn animation, they can’t jump out and have to hold the damage.

A reliable, easy corner TOD off of everyones favorite normal. Can be done midscreen on characters with wider hurtboxes, but both forms have more consistent midscreen versions.