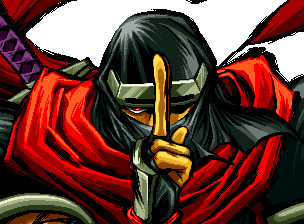 Hanzo Hattori practices his fabled ninja stealth by ensuring you'll never see him through his constant use of concealed explosives.

Hanzo has always been about dancing circles around his opponent thanks to his great movement options and threatening them with frequent pokes, whiff punishes, and command grabs to keep the match tilted in his favor. This is no different in SamSho 3. But his Baku’en Ryu (the Slinky) now goes backwards after traveling far enough to control even more space, and he doesn’t need to choose between different strengths for his command grab -- it’s always fast and it always hurts.

Slash Technique takes arguably the more traditional route, keeping access to his infamous Log Trick that allows a possible escape from this game’s countless high-damaging combo strings and sporting a noncommittal command grab he can threaten with from surprisingly long distances. His WFT, as well, is by far the most damaging one in the game and tricky to punish to boot. It’s generally hard to go wrong with Slash Hanzo, especially if you want to mitigate the risk of getting comboed.

Bust Technique grants Hanzo more teleports to reposition himself and confuse his opponents. In this vein, he also upgrades his command grab to allow for absolutely smothering okizeme possibilities and the very real threat of unjumpable loops to boot. His WFT deals less damage, but by itself will completely shut down a lot of characters’ gameplans thanks to its blistering speed and great travel arc. Hanzo is obviously more susceptible to combos in Bust Technique thanks to no Log Trick, but when he’s played well the opponent will never get a chance to meaningfully open him up before getting put through the blender.

Hanzo is a stealthy ninja man who likes to do the stuff his opponent doesn't want him to do. The basics between both Techniques, as is Hanzo standard, revolves around covering yourself with a Slinky so you can do your thing. Your "thing" can vary, particularly between Techniques, but it tends to look a lot like running in and grabbing them with 623CD. If you don't have space, you do have good pokes in 5A/5B/2D. If you think you'll snipe them out of a button, 2C will make them hurt a lot and let you set up a Slinky for oki funny business. He of course can just command grab them with 623CD, which has solid range and damage. It's what he wants to threaten with at this range anyways.

A huge part of what sets Hanzo apart from his other appearances -- from other characters in this very game, even -- is that his Slinky can travel backwards after going its full distance. This means that a Slinky not connecting will prevent you from using another one for quite a while, but it's not the end of the world. You can just hide behind it and wait for it to go away, or run in and start your game. Your dashing normals aren't exactly the greatest mixups in the world, featuring primarily lows and no overheads, but locking them down behind a Slinky means a properly scared opponent will want to jump out of it thanks to the ever-present command grab. You've got an air throw and some pretty solid jumping buttons, so jump forward and either chicken block or just snipe them out of whatever it is they're trying to do.

Scoring the knockdown and tossing out a Slinky is where the real fun begins. Thanks to it being able to travel backwards, the opponent will be more or less stuck trying to defend against whatever you throw out. If they get up and block the Slinky, get in their face and command grab them for guaranteed damage. Bust Hanzo in particular gets to continue oki off of this. If they roll up to you and try to avoid the Slinky, you can still try to time the command grab, but it'll be much easier for them to jump out. This is where 22A comes in, because its huge invulnerability period will make any desperate mashing completely miss and let you grab them again. It even lasts so long that neutral jump attacks won't hit when well-timed either. Naturally this also lets you grab them. This sounds like a whole lot of "just command grab them" but really, it's your most threatening and strongest option overall. So use it.

Slash Hanzo's Mozu Otoshi is much less committal than Bust's equivalent, and he can land it from greater distances out of a run. This means your game is going to be incredibly flighty, with a lot of fishing and a lot of tricky movement. You can whiff command grabs and anti-air the opponent on the way down if they try to jump out. Go underneath them and 66A from behind. You can set up a Slinky for them to block later or just try to grab the 1f turnaround animation for guaranteed damage. Either way, you need to work your way back in after each command grab, so be ready to either get back in their face or hang back and toss Slinkies to cover your inevitable approach.

222AB is one part gimmick, one part reason to actually circle step. Its long startup renders it gimmicky as an anti-air, but its ability to combo and stun off of back hit is one of the scariest things you can do if you find yourself at that range and absolutely need the damage. Don't just throw this out unless you have space, because despite the unpunishable period at the end of the recovery, you can still get stuffed out of this move.

The Log Trick is what you're really playing this Technique for, though. Escaping guaranteed death or even just a solid hitconfirm is absolutely huge for him in a game where you can die if you get hit at all. AC is the overhead "mixup," but despite being very reactable, your opponent will need to punish out of a run, so you're still coming out with much less damage for your efforts. Unless you bounce into the corner and eat another big hit for your efforts. BD comes out much faster, but leaves you sitting right in front of them begging for a heavy punish. It can punish certain attacks on hit, which helps make this option arguably the better one.

This move overall is good primarily for specific combo-heavy matchups, especially against the likes of Bust Ukyo. If they can't reliably combo you, they begin having to struggle a lot harder to actually outpace you in the damage war. Of course, this plays right into your hands. Play your game, grab them a lot, and pick your moments to escape and make them really work to hurt you.

Remember all that stuff about how you just run and grab them? Bust Hanzo is that but at critical mass. You should be putting out Slinkies pretty much every chance you get, and grabbing the opponent every time they freeze up and block it. Landing a command grab nets you more damage than your WFT and perfectly sets up the opponent for a horrific blender with countless options for you to take. You can walk over them and try to time a Slinky to force them into blockstun on the 1f turnaround animation, at which point just grab them again. If you predict a jump or a desperate attempt to mash out, do 22A and grab them out of their recovery for it. Sky's the limit with him after you land a grab. You just need to land one first.

But all of that is pretty much Slash Hanzo with a heavier dosage of explosions. Your WFT is the real star of the show when it comes to proper mixups. If the opponent is priming to jump out of your pressure or Slinky setups or really whatever, just throw it out and snatch them. If they're down/backing at 2C range, use it. If you're at midrange and they aren't too scared to throw out a button or a fireball, use it and sail right over them for big damage. It might even decide to cross them up, because this move does what it wants and everyone else is just along for the ride.

Back hit stun BnB: n.5B xx 222AB
While Hanzo’s combo game is overall limited, he still has very potent damage output with full POW. The first two hits will stun by themselves, leaving the opponent open for pretty much whatever you want to hit them with. If you’re in Desperation, you could do another WFT for a simple kill combo. You can also land this off of a 66A cross under anti-air, but it’s character specific.

Front hit WFT BnB: n.5B xx 632146CD
Bust Hanzo’s combos are similarly not too varied, but if you're close enough, you can buffer WFT behind your B slashes and make them hurt a lot more.

Back hit WFT BnB: n.5C xx 63214CD
A very powerful option if you manage to back throw your opponent into the corner or bait a big enough whiff with a circle step. Deals huge damage and disarms as is the WFT standard.