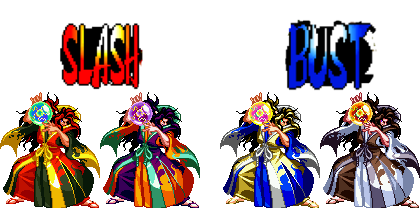 Amakusa does not live up to his future reputation as a tricky midrange mixup monster at all in SamSho 3. He has a very fast and deceptively hard to punish teleport that lets him close the gap in an instant, but nearly every other special he has is woefully slow and punishable. His normals are awkward and rife with blind spots, and would make fine anti-airs if they weren't air blockable. Surely he has great combos to make up for these issues, right? Kind of. He has one “great combo.” That combo is 2D into itself as many times as you can manage. Get good at this and get good at using his teleport if you seriously want to play him. At least his damage is huge if he manages to land a clean heavy or a 2D combo, but you’re better off forgetting 90% of his moves and sticking to the 2D spam. It bears repeating: get good at his movement and get good at his 2D stun combos. If you can’t do either of those, you shouldn’t be playing Amakusa.

Slash is arguably the more consistent Technique in neutral, featuring a usable fireball in Shirei Jin. His WFT can also be a slow hail-mary reversal. Nothing else he has is really worth writing home about.

Bust, the poor soul, is stuck having without a doubt the worst, most useless fireball in the entire game. In exchange, his WFT has no invincibility but starts up very fast -- fast enough to be used in combos and stuff stray pokes. This alone makes Bust Amakusa far more threatening if he’s in Desperation, because one stray WFT will easily erase half a lifebar. He also comes with a far superior selection of colors if that’s what interests you.

As noted above, Amakusa's 5BC will whiff on numerous characters while they're crouching, eliminating its use as a way to punish these characters for down/backing. Noted below are which characters it will whiff on and the situations it whiffs in.

Slash carries the benefit of having a real fireball, albeit still slow. You can still use it to secure space or chip, just not very effectively.

Shoki Dan can be used to catch stray pokes, since its instant stun at least lets you hit with a f.5C if not a full 2D BNB.

Slash can't combo into his WFT as easy as Bust, but it comes with startup invul and can be used as a reversal if you can somehow get it to come out consistently.

Bush's "fireball", if you could call it one, should be avoided at all costs. Unless it's a single hit chip kill, leave it be.

Slaps can work as a pseudo anti air or in the same way as Shoki Dan.

Bust's WFT has faster startup and no invul, allowing him to properly combo into it and counter poke with it.

Stun BnB: 2Dx4 [stun] 2Dx4
This is what keeps Amakusa relevant. His 2D is one of the most abusable kicks in the entire game. It combos into itself and deals great damage. The above sequence will kill characters with lower defense modifiers. Just be sure to properly time your reps instead of mashing, otherwise you’ll whiff.

Back hit stun BnB: n.5C 2C
Not really something you’ll be landing often outside of a corner back throw (character specific) or a big circle step, but it’s worth learning if you want to kill without having to link as many 2D reps. Does about as much damage as a 2D stun combo.

Throw WFT BnB: f/b.throw 4623BC
Fairly standard throw combo, but is extremely threatening with Amakusa's high damage WFT. Only possible for Bust due to WFT starting up faster compared to Slash.

Back hit WFT BnB: n.5C 4623BC
The other main combo Bust Amakusa likes to use his WFT for. Seriously damaging.