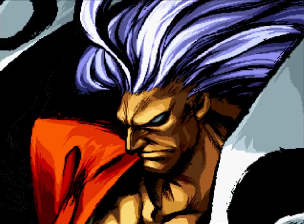 Zankuro, hefty gentleman that he is, knows that he has a very large back. Thus, he concluded it would be very tactically convenient if getting hit in the back didn’t actually do anything.

Zankuro has a relatively limited and effective neutral game with few mixups to speak of, focused on shutting off avenues of approach so he can tag you with a fireball combo. His kill combos not requiring backhit or the corner combined with his high damage is what keeps him threatening. One mistake against him can and almost certainly will cost you the round, so he demands his opponents play carefully and adapt to the unique challenges he presents as their opponent. But his strongest asset isn’t his combo damage or anything else; it’s his almost complete immunity to being comboed from behind. He’s no swiss army knife of options and versatility. What he does have is simply just THAT good.

Zankuro has no gameplay differences between Slash and Bust, but each Technique still has a different selection of color palettes. He is not on the character select screen, requiring the player to input a code to select him. This code will only work in two-player matches, and regardless if he wins or loses, both players are booted back to the select screen to pick new characters. This naturally forces the Zankuro player to input the code again.

To select Zankuro, hover your cursor over Haohmaru and hold start. While still holding start, move the cursor:

Your cursor should be on Shizumaru. Keep holding start, wait until the timer reaches 3, then press AB. Zankuro will be selected.

There are boss hack ROMs that allow Zankuro to be freely selected without use of a code and don’t force the Zankuro player to input the code again if they win -- the SamSho 3 VODs from Mikado show this hack in use -- but none of the current netplay platforms outside of parsec and other similar programs support them. As it stands, just get used to inputting the code if you want to play as him regularly. It’s pretty easy when you get the rhythm down.

The first thing you'll notice when swinging a Zankuro button is that he can't cancel any of them. Keep that in mind, because it means any Shippuuzan you connect will be in the neutral, a raw punish, or off of a throw. None of these situations are particularly remiss for Zankuro, because he's blessed with the fastest throw startup in the game (8f) and 236S is completely safe on block.

Zankuro's strong control of horizontal space is complemented by his incredibly fast walk speed, particularly when walking forward. He has one of the fastest walk speeds in the game, so he can effectively approach while swinging with 5A/5B to keep the opponent antsy. Place your buttons carefully during the neutral -- purely using fireballs leaves you a very big, very open target to any jumpin. Instead, use 236S in situations when the opponent will need to take a risky option to escape or else just block it. Having it blocked is not a bad situation for Zankuro, because he can then choose between throwing out another one or using one of his anti-airs to stop them from jumping in.

"But he's immune to combos from behind!" Yes, but there is a particular rule that still can leave him vulnerable in certain matchups. The back hit invulnerability triggers specifically when he is hit with a medium slash or a heavy slash. It does not trigger for kicks or light slashes. With this in mind, characters with repeated 2D combos can still do these specific combos from behind. It won't lead to any extra reward for them, but it is something to keep note of if you are against any of these characters.

Yup, you heard that right, Zankuro can get hit while knocked down, but only on his backroll. This is due to him not having any invulnerability on backroll. It's an exploit you wanna keep mind of, due to characters being able to knock you back down, thus putting you in a vortex and/or dealing more damage than you need to take. The worst scenario is that you get hit with a front-hit ToD or a stun combo into death. The window your opponent has to hit you is generous, so be wary of that when you're knocked down.

The characters you really need to worry about though is S.Genjuro, B.Haohmaru and Zankuro; who can actually kill you off of you not keeping that in mind. Another annoyances include S.Shizumaru's Parasol and Rimu's Puddle.

Using the hitstop glitch to your advantage

Zankuro doesn't exactly rely on the hitstop glitch to win, but it's very useful if you want to deal a lot of damage pre-stun or having a very easy stun punish (as simple as just pressing 5C at best). If a fireball lands, the world is your oyster; you can link 2D/5A into anything you want, and i mean anything. 2D/5A into 236A? go ahead. 2D/5A into 5/2C? If there's a will, there's a way. It essentially gives Zankuro the "cancellable normals" he was so desperately lacking, but it only works off of fireball. While you can do it for actual damage reasons, there are alternate uses for it, like making timing fireballs a lot easier or just pure style.

At a more advanced level? This also allows Zankuro to do 100% combos off of front hit without relying on stunning his opponent on most characters (On high defense characters, all you have to do as a stun punish is 5C). It's not exactly the easiest thing to do, or the most optimal either but it definitely adds a new layer to Zankuro's combo game.

Stun ToD: 236Ax2 5C [stun] 236Ax2 5C
Very consistent ToD as long as at least one of the fireballs lands from close enough range for the sword hitbox to connect -- if the 5C doesn't stun, you're in trouble. You can do it off of a throw, you can tag them in the neutral with a fireball, you can do anything. This is Zankuro’s entire combo game. If the opponent is cornered all you have to do is throw more fireballs. It’ll stun. If you want swag, try circle stepping while the opponent is in hitstun and start doing it from behind. You can also link 2D/5A into fireballs and make your combo just the tiniest bit fancier. Hell, if you really want, you can end it off with 2D 2C.

High Defense Stun ToD: 236Ax3 5C [stun] 236Ax4 5C
Against characters with 95% defense values (Basara, Gaira, Genjuro, Shizumaru, Ukyo, Zankuro), this is the optimal ToD. Like the above, it still works off of throws.