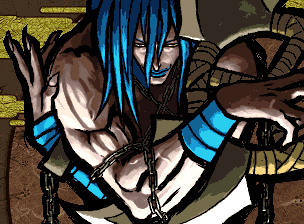 The youkai out for revenge for his murdered wife. OYASUMIIIIII will never be the same.

As a character, Basara is all about strange movement mixups, keeping his opponent at specific ranges due to his weapon being on a chain, abusing the hell out of his 236c puff move and command throw, and generally bouncing around like a goon. He is one of the few characters in the game with a walljump. Unfortunately, the moderate damage and movement options also mean he takes increased damage from everything in the game, 130%.

If they jump into it, you can heavy pursuit if you are close enough

Roll cancel into cmd grab, inescapable if they stand still

Pretty safe and if they try to dash at you, they will eat both attacks

Another kind of grab attempt

Much easier time if you are trying to crossup

The puff can prevent some characters from punishing your super attempts

Bait an attack, careful with this

the oldest trick in the book

Unblockable with the right positioning

Basara is the character that requires you to know all options he has and always controlling the situation, as well as flow of the entire match. In good hands, this guy is extremely dangerous, and I'd even say that he's not for beginners either. Having solid options for opening up opponent, you'll want to prevent dumb turtling with Basara, and it's pretty necessary in some matchups, like against Ukyo, who likes to sit out his lead in the corner, but your mixups is sometimes or even mostly stronger than your opponent's attempts to win by life lead. Also, you have almost godlike space control, but it's pretty unsafe, if you're careless about it; anyway, when the guy tries to pressurize you, there's (j.)236, 2/5AB, puff and 2B in your pocket, and these options are intuitive, excluding special situations or advanced things you can pull out, so there's chance that even Basara can turtle at some moments. Speaking about brute offense, if I can call it like that, this character hasn't much to do simple pressure, maybe except of dash-ins or close jump-ins that are not safe either, and there's roll cancel to cmd grab trick, which you can abuse sometimes, though it can not succeed.