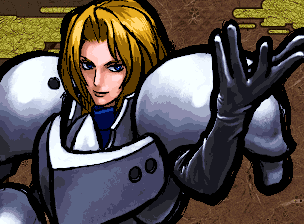 Heads were rollin', especially her namesake's.

Charlotte is doing well for herself in this game. Having inherited most of the moves from both her slash and bust forms from samsho4, she has a very solid bag of tools to work with and is consistently rated in the higher tiers, typically just below top tier if not in it. She might not be the most mobile character, but with her abilities you won't really need it in most matchups. Invariably, she has good options as long as time is on her side. It's hard but if I had to name one overarching flaw, it would be either her lack of a dominating heavy, or the fact that so many of her important moves are deflectable, while at the same time she loses the most armor when disarmed. The latter isn't much of a concern though especially in low level play.