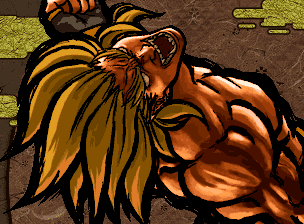 "You can't shake hands with a clenched fist." You can't catch hands with shackles that heavy, either.

Enja is a hard hitting powerhouse with extreme mobility issues. His best strategy involves sticking to the other person like glue and putting on as much pressure as possible. Enja can rarely afford to wait for the opponent to come to him and takes a great amount of effort to stay in range of some characters. However, if successful, he has the ability to deal incredible amounts of damage in the blink of an eye. Enja's rage meter charges up faster than anyone else, giving him bursts of even more power throughout the match. He has a slow dash, a very low jump, and none of his attacks extend beyond short range. His major problems become painfully apparent if he starts getting outranged or repeatedly knocked out of the air during his chase. He is considered a very difficult character to play in general, with advantages varying wildly in matchups. Enja has to tackle most situations in his own unique and usually difficult way, but a solid read or punish has the potential to be round ending - for you or for them. If you want a high risk, high reward character who skews the payoff in his favor the better you get, Enja is the character for you.

Only works if the opponent is behind you or airborne.

Doesn't work on some characters.

Enja's loop (outside of speedup shenanigans) that can be started from either 5BC or j.C. Opponents tend to get pushed out before it kills, which is why it's recommended to end on something like 5AB or rekka.

This might as well be a dream, because trying to land this is a nightmare. Requires you to land 236A almost point blank, and for you to delay the 236B followup as late as possible so it hits while the opponent is grounded. Very oddly enough, this wall bounces while letting Enja move immediately after 236B connects. And the opponent is completely hittable by anything, which lets you land just about anything, even WFT or fatality. Not practical in the slightest, but still, it's the most fun gimmick you can try with Enja that's tournament legal.

With Enja you usually don't meditate at all, and when you do it hardly offers anything useful, but meditating away what rage you have once or twice makes his standard SoN stuff a bit easier, or offers a tiny bit more leeway. There's nothing really flashy or unique Enja gets, but usually goes like this. If they're high in the air, land as many j.AB's as possible, usually only 3 max is possible without meditation. If it doesn't kill, you can end on a j.AB for more damage and a mixup on landing, or end on 623S for a knockdown. If they're low in the air, you can do the same, but if they're too low you can use something like 5AB's or 2AB's, and you should end on Issen if possible. If not, end on a heavy slash for damage or 623S for knockdown. If they're grounded, you can do the standard combo filler into Issen or rekka, or you can start Enja's backhit infinite. However, if they have burst, you may want to either land Issen or 236A so they can't escape.

Enja's gameplan usually revolves around the matchup, but generally the ideal position to be in is in range for high low and grab mixups and being able to counter poke or punish with 5B or n.5B into 236A. you'll have to know your tools and options as well as the opponent's, or else you'll find yourself in a world of disadvantage.

Despite Enja having the worst meditation in the game, he still benefits greatly from his damage output and what Time Slow allows to make using it over Rage Mode a valid option. Having Time Slow gives Enja a checkmate against an airborne opponent, making jumping suicide if he's at the health to use it. However, Rage Mode also has it's pros. It gives you a combo breaker in the form of bursting, which can save you from plenty of round ending mistakes like missing the final hit of rekka. It also makes Enja's damage skyrocket when he's in the mode, and makes his already scary mixups and punishes even scarier, and opens up universal touch of deaths and combos into fatality. Since you can't effectively build towards Time Slow with Enja, you basically decide which mode you want to use when the opportunity arises, since both have their own unique uses.