What is this game?

Samurai Shodown V Special is a 2D fighting game developed by SNK Playmore and Yuki Enterprise for the Neo Geo and released in arcades in 2004.

What makes this Special over the original Samurai Shodown V?

Special is a 'dream match' game, and effectively a balance patch over the original. All characters have been adjusted slightly, and system mechanics rebalanced. It also adds four playable characters: Amakusa, Zankuro, Gaoh, and Mizuki. Sankuro, Yumeji, and Poppy have been removed.

This was called something different in Japan?

In Japan, it's known as Samurai Spirits Zero SPECIAL (サムライスピリッツ零SPECIAL). Zero, as SS5 was a prequel to the rest of the series.

Is this game for me?

Do not play Samurai Shodown V Special if...

Are there any articles on how to get started?

Are there any communities available?

Who do I pick?

Whoever you like. While the differences in tiers are definitely palpable character matchups are more important than tiers and the game is balanced enough that every character has a fighting chance.

What are some beginner friendly characters?

Haohmaru, Charlotte and Genjuro. The closest thing you can get to shoto with some added extras.

Which button layout is used for this game?

Here are some button layouts that are commonly used.

While there is no concrete matchup chart available, there are a few different tier lists around and they generally agree. However, tiers in this game are not far apart, largely due to the game's overall high damage, and it's still pretty much anyone's game.

Order within a tier is not relevant within the first two lists.

Nakoruru has very little that is safe and hitconfirmable, making her reliant on mixups which leave her wide open to counterattack, most of which will do more damage to her than she would have done to the opponent.

While it is true that Enja has high damage and one of the fastest jumps in the game, he has some of the weakest mobility in the game with very short range hitboxes. If you can zone out his jump arc, he has a very difficult time getting in.

Nope. If anything, she's actually a bit underpowered. Whatever you do, don't dash at her. Just walk in. You can react to her ground sliding arrow (2B) with either a crouch block or a hop. Everything else is easy to react to, just block if she flinches at all. Once you're about two character widths away, watch out for her flip move. If she does a jumping attack and you can't catch her in the air, run up and throw her. She has a small recovery period when landing from one where she can block but can't do anything about being thrown.

How can I play?

The most widely used platforms for the game are Fightcade (http://fightcade.com/) and the standalone Code Mystics port on Steam/PS4. Fightcade 2 is the current version of Fightcade, and is the most popular netplay platform as far as sheer numbers. It has a lobby, spectating, and replays, and is easier to matchmake in compared to other options. There is a legacy Fightcade 1 lobby, but it does not see use due to being outright inferior to Fightcade 2 as well as Steam/PS4.

The PS4/Steam ports feature far better emulation quality and was updated with Codemystics' rollback netcode to coincide with the release of Samurai Shodown (2019). These two versions are reportedly more consistent for low-latency connections than Fightcade. However, PS4/Steam versions don't have an online spectator mode, lobbies, or replays, which means netplay tournaments largely run on Fightcade.

The Samurai Shodown NeoGeo Collection is rarely used by PC players despite crossplay between the Epic Games Store and Steam versions, as the netplay is shoddy at best, and it still lacks lobbies/spectating/replays. Additionally, Samurai Shodown V Perfect is functionally the same game as V Special, with some slight cosmetic alterations that do not affect gameplay, so it does not have much of a playerbase. The NeoGeo collection however remains the only way for Xbox One and Nintendo Switch users to play V Special online.

Do not works in one player mode (versus A.I)!

Follow the below steps to manually point to your ROM(s) folder(s):

"I loaded up the game but can't control anything!" 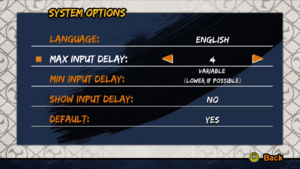 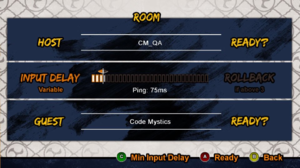 The Code Mystics port of SamSho 5sp allows you to pick the cutoff frame delay before rollback kicks in. In simple terms, you can choose if you want to play using delay-based netcode, purely rollback netcode, or a combination of both. Code Mystics made a video showing how to tweak the settings in order to get the online experience you may want:

A general rule of thumb for having a smooth experience with rollback is to set input delay to a fixed 1-3 frames. This will cover most low-latency connections and minimize excessive rollbacks when playing against higher pings.

What does frame data mean?

Frame data describes the full sequence of animation for an attack.

What's it good for?

Frame data is mostly for tuning your game and understanding how/why things happen. You don't need it to be able to play, but it helps iron out the wrinkles. A simple example is that you can look at the block disadvantage of a move, such as -21, and know that any attack with 21f or faster startup can punish it guaranteed.

What do the data numbers mean?

All characters' data are summarized on the Tables page.

Where did all these numbers come from?

Nearly all the numerical and frame data came from the Japanese frame data site. It was all parsed and made easier to read, particularly for English speaking players.

Some of this information is not accurate, particularly about recoil cancel, so if you see any errors go ahead and fix them.

What's with the move names?

For the most part, they're checked manually and compared with Kao Megura's FAQ, usually matching up for consistency. There's not many disagreements for names, though no translations are given.