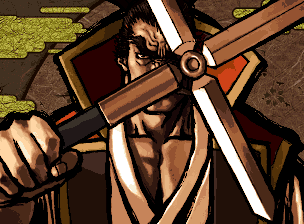 The man with the courtesy name that never ends. When he levels up he puts all his points into mustache power.

Gaoh is a pretty straightforward character. He has enormous range, above-average damage, good mobility, and not much else! He plays sort of like a more aggressive version of Charlotte.

Gaoh has a lot of easy ways of getting combos going, though you'll probably be using 66B or 2B the most.

Near knockdown. You recover quickly after 236A so you can follow it up as you please. If close, you can do 2BC for a teensy bit more.

Far knockdown. Higher damage variant, but you recover later. If it's into the corner you can throw in a 2BC but it's probably not worth it.

Style point bonus. Can only be done at point blank range, but does more damage than 236A and recovers quickly.

This is a low hitting combo that actually works at the maximum range of 6C. Good stuff, but impossible to hitconfirm.

This has to be canceled immediately during hitstop. In fact, that is the only reason this combos.
Has to be done at point blank range or near the corner to actually combo in full, otherwise they get just the tip of the WFT and don't get disarmed or take much damage.

Now this combo has some interesting properties. Because the recoil cancel period is pretty late on this, if you're fast you can actually Option Select the grab out, canceling into it if you hit and doing something else if you miss. n.2A is -14f on block if not canceled, though, so be wary.

Basically the same as n.2A except no recoil cancel to save your ass.

A low-hitting kick that links into 2B. Also links into n.5B, but that does less damage. Mostly there for okizeme.

A low-hitting kick that links into 2AB. Easy to hit confirm because of large hitstun.

The usual when you can't cram an Issen in when they fall.

Boring, but Gaoh's a boring guy. This only applies when they don't have Rage Explosion available.

Gaoh sucks at raging. While the damage bonus is nice, his WFT is awful, he has very few ways of forcing damage, and it just takes too long to charge for too little usable time. Unless you feel like taking a lot of risky gambles, you're better off saving meter for time slow.

He has almost no high-low game to speak of, so it's more likely you'll catch the opponent mashing with lows than you will catch him blocking wrong. Focus more on footsies and timing. You've got a lot of range that's difficult to approach safely on, and Gaoh's movement is actually pretty good, so make them guess!

If you must run for lows, 6C has good range and combos with 236A and 623S. Impossible to confirm though, so be careful. Because Gaoh has no credible high threat this is not very useful.

When you're in situations where you want a good reversal move, your best options are 236AB and backdash. 623C isn't invincible but starts up very quickly, so if you're not going to have a sword in your face immediately you can hit it.