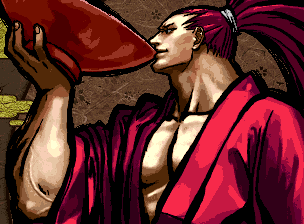 Owner of several WSOP bracelets after killing his opponents with oversized playing cards.

Genjuro is a well-rounded character. He has plenty of damage available and a lot of good options at any point in the fight, topped off with great control of the airspace. Every version of his Rekka is very punishable, they should be confirmed into or covered as a mixup instead of being used in the neutral game. Although he is famous for his bouncing card, know that it becomes increasingly difficult to force an opponent to block it as they become aware of the matchup. This game has many ways of dealing with projectiles, and many ways of making okizeme difficult to implement, but Genjuro is blessed enough to make it work better than most others.

Standard rekka combo. Note that only 236A will continue for the second hit.

Link combo starter. Not a cancel.
Omit the (5 or 2)A before the Rekka to easily combo mid-screen.
You need to start near the corner to connect the 2BC.

Requires very close spacing and an immediate cancel to combo

Unblockable rage explosion combo, can be rage exploded out of. Do it in the corner.

Converts a mistimed 2B into bigger damage.

Example of a card bounce letting you get more damage out of a Sanren Satsu. If 236A is blocked, the card will fall on them and keep you safe to continue pressure.