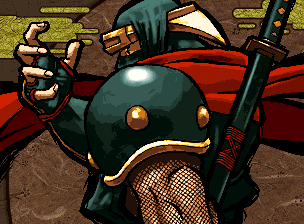 As you may or may not know, Hattori Hanzo is a ninja. A real ninja, like a Japanese historical figure, reincarnated by SNK into the Samurai Shodown universe.

Hanzo is a very mobile character who can be very hard to pin down. He lacks some of the poking tools other characters have, namely an anti air. Being a ninja, he won't let that stop him. Using a combination of projectiles, mixups, and mindgames Hanzo will fight his way to victory. His command grab looks cool.

Nothing special here, his AB attacks other than 2AB are all very laggy during Time Slow making them not very useful. Get in as many 5Bs in as you can before meter runs out before using Issen. If you need to start from a dash use dashing A since it's your only dash attack that doesn't knock over.

However, Time Slow is a good chance for Hanzo to land his 623AB outside of a punish.

Hanzo's neutral game is really heavily reliant more than anything on his very fast dash, and very fast/cancelable backdash. Dash under bad jumps, backdash out of dodge to avoid unnecessary risks. When you have enough breathing room try to get out a 214B/AB, or just 214A if you don't have much time. Once you have a fireball out their options are very limited and you can start to turn things in your favor. Also be looking for opportunities to land dash in grab / 66C.

Hanzo may not do a lot of damage all at once except for when punishing with 2AB or 623AB, but he can annoy people into making those mistakes.

> Dash, AB Crossup, beats most DPs by means of avoiding them entirely.
> Dash, B Uncrossup, low, combos into 2BC.
> Dash, 623A If you dashed far enough, the dashing version will come out, using a normal grab will work just fine.

> 214AB Doesn't actually grant you any followup, but it's pretty much inescapable, eats wakeup jumps / mashes / whathaveyou for free. Isn't generally needed unless you are especially far.
> 214A/B... Most common option, both give time for followup, use 214B when you are outside of 214A range.

> Crossup 421B/C... Depending on how far you were and how fast you did the teleport, the projectile may or may not crossup.

While Hanzo's teleports are rather iffy as ambiguous mixup, they do have a lot of mindgame potential, especially once you start canceling into them.

Hanzo's fastest teleport is actually his teleport feint, 22S. Probably the one you want to be using the most as well since there's much less risk involved. A simple practical use for it is to 22S just outside of your opponents effective range, and as they wait for the followup dash in and 66C or regular/command grab.

For example, off a knockdown in the corner you're unable to go into much of a dashing mixup. As your opponent stands up you can do 22S and on reappearing 623A for a tick throw to get around the huge throw protection window on wakeup. You can also cancel into any of his teleports off a wiffed special cancelable poke, or his backdash, giving you even more options.

Here's another example: Close 5B (blocked) > 22A > Grab. Same situation right? Obviously they are going to catch on. Next time do close 5B (blocked) > 421B/D (whichever teleports you away) > 66C to punish a wiffed poke. You can really do anything after teleporting back, but the idea is to do something they never thought you could do. For the record, 22A > 2AB is faster than 63214BC and is also much safer.

Further expanding on that possibility, you could 5B (blocked) > 22A > 2AB > cancel recoil into something else / confirm into 2BC. As you can see the possibilities are basically only limited by your imagination.