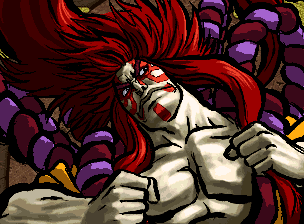 Failed to begin an actor line, for his frog listens to no one but him.

Strong defensive space control and the ability to mix up from arm's reach combined is what makes Kyoshiro tick. To this effect, he has a good suite of tools to choose from and a bunch of ways to use them, gimmicky or otherwise. He's played most safely in the war of attrition, as his mixups range from risky to spectacularly risky. But nobody blocks the frog anyways.

Kyoshiro is not a character who has a lot of normal combos (except backhit, deep hit, backthrow, and pursuit), and the ones he has are possible thanks to the frame data of his n.5A, but their timings aren't easy to get.

Not the simpliest timing, but this combo does exist.

This one too have a very tight timing, but it's actually a true combo.

Another tight timing, it's character specific and works only against tall characters, but it's also a true combo.

You won't have many occasion to do those but it can still happen, so being prepared and ready to strike is not useless.

Don't be too close to avoid to drop n.5AB instead of 5AB.

Be warned that this one works only against really tall characters such as Zankuro, Gaira and Kusaregedo. Can be followed up by 8BC or okizeme move.

WFT variation of the one above, same condition. Can be followed up by 8BC or okizeme move. With this one we really enter in the theoretically, but it does exist so why not add it.

Fatality variation of the one above, same condition. With this one we really enter in the theoretically, but it does exist so why not add it.

Because of the Kyoshiro's really floaty jump deep hit are usually to be forgotten. But against an unprepared opponent or with a big read those can be used as punish. So as the backhit combos, knowing the deep hit combos is far from useless.

You'll probably never use it, but this combo does exist. Can be followed up by 8BC or okizeme move.

Easier in backhit. Can be followed up by 8BC or okizeme move.

If j.AB cross-up, you can do 5AB twice (until knockdown) and so get three 5AB in one combo thanks to multi-hit and then finish with 2BC. It's hardest against small characters such as Rimururu, Nakoruru or Rera. If you like gamble you can try this as okizeme but it's at your own risk.

If your opponent is near your weapon, you can backthrow, cancel the animation by pickingup your weapon, then be able attack your opponent. This kind of combo is really theoretical but to be aware those exist and learning them doesn't hurt anyone. But still keep in mind that situations where you can use it are very very very rare.

If you're too close, you'll drop the n.5AB instead of 5AB, be carefull.

Be aware that it doesn't work against all characters. Can be followed up by 8BC or okizeme move.

Same for the one above but with the WFT insted of the frog. This one too doesn't work on everyone. Can be followed up by 8BC/2BC or okizeme move.

Same but with a special. Keep in mind that you can't 421S or 214C after the backthrow/weapon pickup.

Same but with the super. Can be followed up by 8BC, 2BC or okizeme move.

Same but with the fatality. With this one we really enter in the theoretically, but it does exist so why not add it.

Kyoshiro can use his pursuits in many situations, but sometimes you may prefer to use the knockdown avantage for some okizeme game. Anyway there is the list of possibles low and big pursuits.

Kyoshiro's 66C can slow down really quick and can be guarded and punished, so be careful when you use it.

If you're too close you might have to do a small walk or dash (depending on distance) to hit with 2BC.

In the corner, you can use 2BC freely.

Only does a little damage. Usually you'll prefer doing another 421S or whatever.

Also doesn’t have a lot of damage output. You'll prefer doing 421S or whatever.

Extra bit of damage. Again you'll prefer doing 421S or whatever. If not in corner you can use 214C as a pursuit after a forward throw, if you need this to kill it can be usefull to know that.

If you practice the timing enough, you can do it without having to adjust your spacing.

Careful, if you're to close you may end up whiffing it, and if you do you can be severely punished.

This one is a match finisher move, use it when you know you’re gonna win the match. It does a lot of damage so have fun!

You can do 66 in the animation of the WFT and maintain 6 to dash as soon as possible. The 8BC combo works only against heavy characters like Kusaregedo, Gaira and Tam Tam. The 2BC works on everyone.

Be aware that the 8BC timing is not the same for the WFT than the Frog. In this case do the 8BC as soon as possible.

This one is not likely to happen often, but to know that Kyoshiro's projectile knowkdown on backhit and can be followed up by 8BC can be usefull.

Standard affair for when you catch them in the air. If they're low enough to the ground for 2AB to land, always use it over j.AB. In case either won't kill, you might want to end with j.2S or 623S for a knockdown.

looks similar? Indeed it does because Kyo lacks any good highs that leaves the opponent standing, so your best bet is to wait till you catch your opponent doing something stupid so you can pop SoN. just be careful about rage bursts, in that case you might have time to fit in a 50/50 for some damage, but don't count on it.

Yes, sometimes you just need the guaranteed damage to close out the round since they can't burst until after the 8BC connects, though the idea is that this should kill anyways.

Kyoshiro is an ambivalent character, he got strong offensive options thanks to his mixups, chip damages and okizeme game, and on the other side he got very strong defensive options courtesy of his good range, damages and his amazing toolset of anti-air. But because his offensive side his really risky you should be more focused on his defensive game. With him, you want to force your opponent to stay far and made him make mistakes to control space and punish him. By the way, even if he's a zoning/defensive character, you should not underestimate his capacity to fight back at close combat, because the 44 2S Instant OverHead can be very threatening.

Due to his good range on his normals, Kyoshiro has a good set for zoning and poking purpose.

Be carefull when you poke and zone with your normals because if you are predictable your opponent will may try to deflect.

Two last tips, the 214C/1D 214C move are really strong as anti-air when you know when and how to use them. For exemple 214C is usefull against vertical jump because most of the cast will not be able to cancel the frog by hitting you. The 1D 214C is more used against forward jump, but don't do it too close from your opponent because you'll eat j.AB.

And now the second, after punishing a jump with forward j.AB throw your opponent if you're the first one to get on the ground. If not, people will probably try to run throw, if they are doing this do a backdash 2S (and just backdash/defend if they don't run toward you).

Kyoshiro has a really good okizeme tools, 5BC, 3C, 421S, 44 2S, 66B... Not all of these options are safe but if you mixup enough you'll be very annoying for your opponent every time you knockdown him because of the low, overhead and chip damage mixup.

The 421S option is a good one to do some chip damages (and the A version is pretty safe and can be followed up by the frog/deflect) but if you do it immediatly after knockdowned your opponent, he will not wake-up and stay on the ground to avoid the chip damages.

Round finisher and chip damage

Cool fact, if you manage to hit with 214S, 421S or 236CD, even if it's on guard, your opponent will not be able to rage explode to escape the chip damages.

214C and 5BC act as your staple high risk high reward 50/50. Both function as low crushes since they get get Kyoshiro off the ground fast, which makes people respect them even more. it's very common for Kyoshiro to have his opponents turtling on defense, which gives you ample time to go for a 50/50, or just dash in and grab despite his sluggish dash speed. And that's not all, with tools like 66B and J.2S and more, you can even mixup your mixups. If you play your cards right and get in your opponents head Kyoshiro can be equally scary on offense as he is on defense.

Of course, all this varies in mileage, since more experienced players won't fall for cheap tricks. Or maybe they will. It's best to not rely on gambling for wins when you've got such a solid kit, especially against hard hitting character as Haohmaru who can counter-attack with a Zankousen (632146AB) after a whiffed/guarded 214C or 44 2S. Keep in mind that those options are very unsafe.

Kyoshiro's versatility extends even to how to play with his rage and meditation, since both give him access to essentially different game plans. Letting him rage gives him access to one of the highest chip moves in the game, though it's decent as a clutch anti air or punish. Being raged also makes his already damaging mixups scarier. On the flipside, since his meditation is really solid, it gives him a loaded gun for the final round, essentially giving him a free round if the opponent gets careless. In the end it's really up to you and how you choose to play the character, as both are effective in distinct ways.

Anyway if you are not behind on life, no need to try to fish something or using overhead to jump over projectile, you can just duck with 2D or neutral hop with 4D to dodge projectiles to force them to come at you. Those tips are usefull if you're behind.

If your opponent tend to use a lot the throws you have some few things to know. The D button (2D, 4D or 1D cancelled into something) can be very usefull in this situation, learning to deal with it will make your life easier as throws are concerned. As said above in the anti-air section, the 44 2S is really strong if well timed, because they wont be able counter it if they whiff their throw, and even if they don't whiff it, because you have an animation when you stop running they will probably get hitted by the spin.

Anyway that's not because they run that they will attempt to throw, dashed attack exist, if you try to 44 2S everytime you see your opponent running toward you you'll get scuffed.