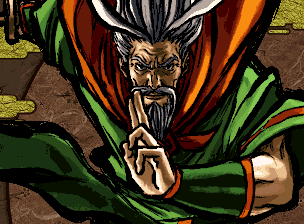 Kicked off from a Chinese wire-fu movie set for one too many lectures.

Yunfei's focus is on his really wild movement options. He's the only character in the game with airdashes, and they're all good. His actual attacks are average at best, although he has a solid ranged high/low mixup. His rage balance easily give him the strongest time slow and Issen in the game, which is to the benefit of his ability to make the opponent edgy. Playing him requires a lot of creativity and trickery, so if that's your bag he's the old dude for you.

His main weaknesses stem from his difficulty in dealing with wide area type moves, such as Genjuro's DP, being grounded due to fear of the opponent's time slow, and simply being outpaced in the damage war.

Yunfei has no distinction between near and far slashes.

Version that almost always works, regardless of where the other guy is. If done as a backhit, wait and do the 8BC after landing so it hits.

More damaging variant, but can only be done on characters on or near the ground, and not on backhit. You can 2BC when it's into the corner only.

This actually does LESS damage than just letting 5AB finish, but it knocks down. On backhit, they're launched upwards so you can land an 8BC for extra damage.

While it does need charge, this is the only way to combo into 236AB and it REALLY HURTS. This is by far Yunfei's strongest combo, but unfortunately it's really easy to explode out of.

The only way to combo into your WFT, this does about 55% damage. Really nice.
If canceled immediately, the game will freeze for two seconds for no apparent reason.

Hits low, high range, solid damage, great mixup with 5BC or just to catch people who like to dash forwards a lot.

Only works at the specific range where the first kick connects and the second does not. Decent midscreen poke punish. Can only 2BC in the corner.

The usual when you can't cram an Issen in when they fall. With Yunfei you're almost always going to have enough charge to wait their fall out for the Issen.

Launches, can't be rage exploded. Timing on the followup can be a pain, but the range and speed is really nice. Great punish if you think they'll recover quickly.

Launches, can't be rage exploded. Neutral jump after the 2AB and wait until you're coming down to hit with j.AB.

Launches, can't be rage exploded. You can cram in a second 2AB if you meditated enough. Useful!

To get into the air, you can do one of the following:

Aside from the airdashes, you have three additional ways of controlling your movement in the air:

Above all, be creative with your movement. Your goal is to not be predictable and to get the opponent to want to try to smack you when you're not there.

Yunfei takes the longest time to rage, easily more than a round's worth of damage to get there. When he does finally rage, it lasts for a whopping 60 seconds, the longest in the game. This means you've got two basic routes for what you can do with the charge.

This is your best bet for most matchups, since it allows you to get access to time slow very early. This forces the opponent into being defensive, since Yunfei has strong unburstable damage with his launcher normals, and if they've already exploded he has tricky airdash high/lows that cash out into Issen. Very useful in shutting down offensive or fidgety characters.

Since the rage lasts a really long time it gives a substantial damage bonus to everything you do. You do have to be careful about the Kenki Gauge here, though, since it does still take time to recharge.
The WFT itself is not boosted by rage damage, so it's not something you'll want to use unless you think it will cinch the win for you. Even if you have the opportunity to land it, the extra rage time is usually better for you. Stick to 236AB.

This is worth noting because of its sheer range. Yunfei can run this mixup on opponents at least a full character width away.