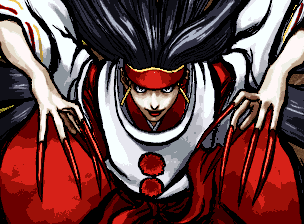 This character is not good at all. Pokes are more annoying than threatening, poor high/low game, gimmicky WFT. Her range is good but she can't safely start pressure off of anything. She does have a command grab and great normal throw range, which is really important to her game, since she has very few ways of forcing damage. Her damage is surprisingly high on a clean hit, though, so she can occasionally random out wins. She just has a lot of trouble landing any of her heavy hitters consistently or reliably.

Good damage, but 214S is really risky as anything but a punisher.

Variation of the above for when you land 214S from far away, somehow. Sometimes the timing is awkward on the portal and you can't get the pursuit followup.

Mizuki's strongest combo. Really nice damage. Do it whenever you can, preferably with 66B starter.
Sometimes even a point blank n.5B or n.2B will push the opponent far enough so it will not combo. 66B is more consistent, but even that one can still not combo, and it's tough to get from close range.
It always works from behind regardless of starter, so if they're dumb enough to do something that lets you punish from behind you should always let this one rip.

Less damage, but the combo doesn't drop all the time and you can reliably do it point blank. Knocks the enemy down closer to you.

Hits low. Damage is somewhat poor, and 2AB exists, but you can do this. They might mash between the hits on block and get nailed if they don't realize what's going on.

If the other guy actually gets hit by 236AB, you can follow it up for some nice damage.

Corner only. It doesn't have to be antiair hit.

Low hit that combos into the overhead dog. This can be exploded on reaction to the low, so be careful.
Second hit can crossup if 623AB is used and if it connects your only option is dash xx 8BC.
If the second hit of the dog doesn't connect, you can Issen instead or do few j.AB reps. This is character specific, working best on characters with high juggle boxes like Haohmaru.

Boring, but if you can't wait for them to come down to Issen them, that's what you're stuck with.

Boring, but she doesn't have much. Explodable, so just do the Issen.

Finish weak opponents off with this. If he jumps, backdashes, or tries some other way try to escape, use an Issen.

If you pick this character, you lost at the character select screen. At least you didn't pick Nakoruru.

Your pokes are kind of okay, and your movement is not half bad. Try and use your range to your advantage, with lots of ranged pokes like 5B.

Abuse 623C pig grab liberally, try to tick throw into it off of 66A. Roll into it during lulls or as a fast punish.

Punish jumps with 5AB, neutral jump AB, backroll 236A, or WFT depending on situation.

If you do Mizuki's 623AB in very close range and enemy blocks first hit, Mizuki jumps over enemy and second hit become cross-up. Is it useful? Hell no!