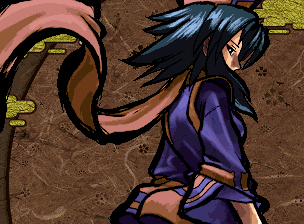 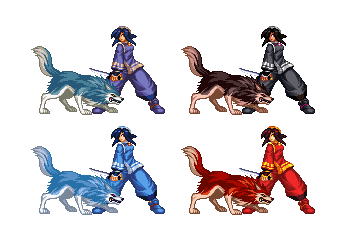 Delivering Nature's punishment one wolf headbutt at a time.

Rera is a unique, agile character who can ride on her wolf Shikuru for an alternate moveset with different properties, like canceling her normals into dashes or backdashes, or even using the dismount as a double jump to escape safely or trick the opponent. She has a lot of tools, and playing her requires a lot of moving around to bait the opponent into getting hit, so play her if you feel that's your kind of playstyle.

These apply for all wolf slashes. w.5A/w.5B cancels are considerably tighter, while w.5AB does more damage.

Standard and easy, sets up a far knockdown which gives you time to get off the wolf or set up an oki situation. This is what you'll be using most of the time.

6C cancel must be immediate, and you'll be punished if you don't do it. For when you need damage, but it puts you in a bad position.

Tall characters only, slightly more damage than the above. Most damaging non-WFT option, but again not a great position on landing.

The only way to combo into WFT, you'll want to do this if you ever land a w.5AB while raged.

The infamous infinite. Works on everyone. If they're tall you can do 66 j9.AB instead of w.669AB, otherwise you must hit 9 and AB on the exact same frame.

For that extra little bit of damage.

Rera's 2BC is incredibly slow and does very little damage, but you can follow up for a little more damage this way.

Connects near corner only.

Rera is good both on and off the wolf, but in different ways. Learning to differentiate between when each is useful is a very good thing to be able to do.

She has throws, D button actions, deflects, can triangle jump, and regains Kenki Gauge normally. Her strengths are in her agile movement, quick pokes with 5A/2A/2C/66C, long range 5AB, an easy knockdown punish with 6C's incredibly fast startup, and her fast jump with her godlike j.AB and easy knockdown j.2C.

Her poking game is good to keep opponents on their toes, setting up tick throws and other shenanigans, and the speed of her jump along with the amazing hitbox with j.AB means it's very difficult for players to deal with her directly in the air. Don't hesitate to just walk up to them and annoy them into getting hit or baiting out fodder for deflects, but be careful to not get deflected yourself.

Despite this, her dashing game is not very good. While she can do a very quick dash up throw with it, which is a great punishment tool, her dashing attacks are not very good so players are often willing to challenge her if they see it coming. 66A is a long range poke that is very nice if it hits but is horrible on block, so use with caution. 66C is a good tool for stopping all kinds of obnoxious attacks, since she slides pretty far and has a good hitbox, but it doesn't hurt much.

She can get on the wolf by doing 214C from neutral while she is close to the wolf. While riding the wolf, she doesn't have any of the stuff mentioned in the above section, but she can cancel all of her normals, even w.2AB and w.5BC, into specials, dashes or backdashes. She can also block instantly from a dash, has invincible reversals in w.412S and w.623S, has limited air control with w.j.236S and w.j.C, dismounting for what is effectively a double jump, can use her WFT, and of course still has her godlike w.j.AB. Since the Kenki Gauge will not recover when she is on the wolf, she needs to get off after doing damage to regain it.

It's very important to know that you can cancel all of her normals, even the sweep, into dashing or backdashing. This gives her a lot of mobility most characters would not have. Her overhead can't be canceled into it, but it's safe on block so backdash is generally free afterwards.

w.412S is an often overlooked move. Its startup is very fast and invincible to all attacks, but it covers a very far distance in a short time, which can be used to punish whiffed attacks or obvious dashes/backdashes. At far range it's actually advantageous on block, and is good for closing the gap if they can't react in time. Closer up, it's not safe on block and you're almost guaranteed to be thrown. You absolutely must hitconfirm it, though, because if it does connect it not only will not knock down, it will leave you at point blank range to be thrown, so you need to be able to hit confirm it to cancel into 6C. A problem with this move is when it catches outstretched hitboxes, you can't combo with it, so be careful.

w.236CD, her WFT, has much less invincibility but crosses the screen much faster, making it good to beat all kinds of whiffs, blocked attacks, or bad jumpins. It's actually not punishable by heavy attacks, so unless the opponent has a very quick and damaging combo the worst you're going to eat is a throw punish.

Jumping backwards into j.w.236S is a good bait for attacks if you're close to the opponent, since becuase of its speed it's sort of like a confirmable punish. Doing a jumpin attack and then immediately jumping backwards to test to see their reactions can help, but don't do it too often or they'll mash out antiairs.

Canceling any of the wolf specials into the separation 4C or 1C is a good way to escape, but much of the cast can punish with heavies so you're sometimes better off just eating the throw. Alternatively, you can start an attack and then cancel it early, before it connects, to fake out or evade projectiles, e.g. w.623S xx 3C.

The wolf dash can cross through the opponent, and unlike most dashes you do not automatically turn around when you do a dash normal. Normally you'd have to spend time turning around, but she can instantly change direction by tapping 8, which will also push you outside of the opponent's collision box if you're still inside, letting you set up an instant mixup with w.5BC or w.2AB, possibly setting up the backhit infinite off of w.5B. You do need to be careful of being thrown when doing this, though, so you should be aware of your opponent's throw range and willingness to mash it out.

Trying for a crossup off of a blocked attack is generally not a good idea, because it gives the opponent easy timing to throw you. w.5AB's cancel period is later than w.5A/w.5B, making it even easier for you to be thrown out of it, so use sparingly. It's better to try it out in the open, because they won't know if you're going for it or something else. Even better, if you space yourself correctly their throw mash will cause them to hop instead, leaving them open.

Finally, the dismounting the wolf for a double jump is one of her most useful tools, allowing you to bait out DPs, avoid many obvious attacks, or simply change your angle. Be creative!

Rera is one of the few characters with a genuine infinite combo, done off of a back hit. Her Kenki Gauge will empty out doing this, so it doesn't do as much damage as you'd hope, but it can eventually kill. You can start it by either doing w.5AB xx 66 8 w.5A to get behind them, or simply start it with a normal backhit w.5A.

Against shorter characters, you have to abuse an input glitch: w.5A xx 66 9AB w.5A xx 66 9AB etc... 9 and AB must all be pressed on the exact same frame. This glitch will cancel the start of the jump into w.5AB, allowing you to dash cancel from a grounded normal into another grounded normal almost instantly.

Rera has a variety of ground punishers available to her, both on and off the wolf: