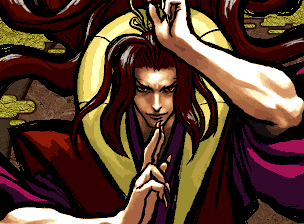 Amakusa is a decently rounded character with some interesting and unique tools. What he lacks in somewhat slow and restricted mobility he makes up for in range and versatility. He has quite a lot of solid zoning tools and unique mixups. He also can deal quite a lot of damage with some risky maneuvers, or constantly pester with small damage using safe and reliable antics. Though, using him too recklessly may lead to dismay against more seasoned players. Amakusa may seem straight forward, but he can prove to be rather counter-intuitive to beginners, as he actually requires a broad understanding of the game and a very specific understanding of how his moves work. The reason being is because, while he seems to have all the right tools, he is typically considered a relatively low tier character that needs to work hard for his wins.

Timing on n.5A and n.2A are tight, but it does work. n.5B and n.2AB versions works on wide characters only.

WFT and Instant Kill can drop if n.2AB hits from its maximum distance, but that rarely happens.

Can link off of a backhit 66A into basically any normal attack. Especially handy when crossing under their jump.

Comboing into 214AB requires you cancel your normal ASAP, or it will get blocked. n.2B's slower startup works in its favor for this combo, because you have longer to input the 214AB before its cancel window occurs, in exchange for being a slightly tighter link.