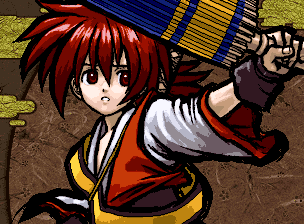 Young man with an umbrella of mass destruction.

At first glance, Shizumaru seems like a standard character with a fairly standard (if slightly less threatening than some others) toolkit. Then you remember that you can screw with people thanks to your crazy aerial mobility. And then you remember you've been holding down the D button for about a minute and a half and make your opponent explode.

Standard air to air time slow combo if you can't catch the opponent with an Issen.

Much like the low float mixup, being able to back up Shizumaru's float crossups with Issen makes them much scarier.

Shizumaru is a character that excels at catching people off guard and punishing their mistakes. Since he suffers from a lack of variety in his grounded neutral tools, he instead opts to take to the air, using his umbrella float and all of the shenanigans associated with it to mix people up, mess with their anti-air timings, and all sorts of nonsense.
Alternatively, once you get to the second round (and you know how to keep a button held down for that entire time), Shizu can simply force the opponent to respect him by keeping the threat of his insanely damaging Shin Amanagare Kyourakuzan available to punish any single mistake in the hardest way possible.


Using Kyourakuzan
Kyourakuzan is Shizumaru's version of Boxer's TAP from Street Fighter, with a couple of key differences.
Firstly, he only needs to hold down one button, which can be changed at will.
Secondly, his charge carries over between rounds, and he can start charging it from the character select screen. At max charge (about 80 seconds), this move does stupid damage -- about 50% at minimum.
Oh, also, he can combo into it.


One of the keys to using this move is knowing how to switch the button you're using to charge the move. It's not incredibly difficult to do so, especially since you can buffer it inside of other actions to hide it, but you need to make sure you don't let go of the button too early or switch to another button too late, lest you accidentally lose your charge or let the move rip when you don't want it.
If you want to meditate while charging Kyourakuzan, you'll need to do so bit by bit, by tapping the D button repeatedly rather than holding it down -- doing the latter will cause you to unleash the move.
A neat little trick you can do while charging Kyourakuzan: pressing your taunt button (start on arcade, whatever you've set to "provocation" on PS4) will cause you to unleash the move without losing your charge if it whiffs or gets blocked, which makes it a fair bit more threatening thanks to the newfound sense of impunity with which you can potentially make people explode.


Uses for Float
Shizumaru can begin floating by pressing 8S while in the air, either after the peak of his jump, or from a backdash. You can cancel the float at any time by pressing 2, and either come down with a button or his "divekick", or re-enter float by pressing 8S again. While floating, Shizumaru can make himself drift to the left or the right, giving him a surprising degree of control over his aerial positioning.


Floating from a jump gives Shizu access to all sorts of trickery, since the ability to drift as well as exit and re-enter float as he sees fit means he can mess with the opponent to a huge degree, ranging from setting up tricky cross-up situations to screwing with anti-air timings. It's here that Shizu generally wants to use his aerial mobility to frustrate the opponent into doing something stupid. You can quickly descend and potentially catch people off guard with your "divekick", Raiu (AB while floating), come down with a j.B that could hit on either side depending on your positioning, or just unfloat-refloat a bunch and test your opponent's ability to anti-air you.


Floating from a backdash is a little trickier to implement, but it has some interesting offensive uses.
Inputting 8S quickly from a backdash will cause Shizu to start floating very low to the ground. From here, you can come down with Raiu to potentially shut down advancing buttons or other kinds of movement (almost like a back swing blow). Alternatively, you can unfloat and come down with a j.A, which has slightly better range than Raiu and is much safer to attempt. Be careful not to unfloat too early, as attempting the unfloat j.A too quickly will simply cause you to refloat, due to the game's input buffer.
In the corner, you can use backdash float to set up a cute little mixup between unfloat j.A and unfloat land 6C. If your opponent is respecting you, they're going to have a hard time reacting to this.


Rage
Shizumaru mostly wants to meditate his rage away, due to his short rage duration (8 seconds, the same as Rasetsumaru) and a pretty decent meditation (comparable to Haohmaru). Time slow also makes Shizumaru's float mixups significantly more threatening due to Issen backing them up.
That being said, having access to rage (or even rage explosion) can make the already stupidly damaging Kyourakuzan that much scarier, so if you can find a way to squeeze in that damage during rage you have no reason not to -- you may just be giving up some consistency as a result.