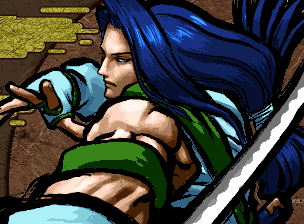 No time for you.

Good pokes and block recoil mixups, very long range slashes, and a surprisingly fast dash speed. His bubbles and spouts let him control space in unique ways. The problem is that he's a zoning character who's not extremely good at zoning since all of his special moves are heavily punishable, and a decent amount of characters have moves that allow them to just bypass his zoning tools. He's also pretty bad at forcing damage. If your opponent plays a very defensive or patient style, your special moves become a lot less dangerous and dash mixups with 66B, 66C and grabs are pretty much all you're left with (and even then they don't lead to a ton of damage). If your opponent takes the life lead, you'll have a hard time catching up.

This does less damage than a 2AB and comes out only one frame faster, so most of the time you will not want to do this.
The main benefit is that they take more time to land from 623S than from 2AB, so you have more time to do a wakeup setup. This is a good way to get a bubble out.

The only way to combo into his WFT. If you're close enough to punish with it, you might as well, because you're not landing that any other way.
2BC followup only works in the corner.

Bubble stun is nice, but how do you follow it up best?

An obvious one. This is the highest damage you can get from the ground.

One of the only ways to reliably land WFT,

If someone jumps on a bubble, they can be juggled for a short time afterwards. 5AB is your best bet for hitting them.

The infamous unblockable setup. The 236S is actually not the first hit: You put the bubble a short distance behind the opponent, and then rage explode in front of them. Rage explosion is unblockable and pushes them backwards into the bubble for further comboing. Since you've got the bonus explosion damage, the followup 2AB really, really hurts.

Dashing low. Decent damage, good mixup with 66B or dash up throw.

Standing low that links into Sogetsu's best combo starters. Difficult to land, though you might try it as okizeme.

66B is an overhead, and sets up a combo that can't be rage exploded from. If you don't think Issen damage will be enough, or managed to land it on the mixup, this is a good combo to use.
The timing on this can be tricky, spend some time in practice mode for it. The first j.AB has to be done instantly off the jump.

Not burstable. This works on some of the cast. Many of them will just flop out, though, and you have to be fast.
Confirmed invalid on: Charlotte, Haohmaru, Jubei, Tam Tam, Yoshitora, Yunfei

Not burstable. This works on some of the cast.
Confirmed invalid on: Galford, Hanzo, Haohmaru, Jubei, Kusaregedo, Tam Tam, Yoshitora, Yunfei

The usual for when you can't wait for them to come down for an Issen.

Sogetsu has a speedy dash, but his dashing attacks have very poor range, so there is not as much benefit to the speed as you'd hope. His jumping movement is mindnumbingly slow and not suited to giving chase. These two can be a serious handicap in certain matchups.

If you want to run a close up mixup, your goal here is to get into a range where they can't react to dash startup easily, so they're less willing to sit still against anything you could do. This is roughly about the range of 2B, which is good for you. Sogetsu's pokes are really strong, particularly 5A and 2B.

236S bubbles make great cover for closing the gap safely, if you can get them out. Don't use them unless you're far away or got a far knockdown. They take forever to come out and recover from, usually leaving you wide open.

2AB is an omnipresent threat, since it can quickly and efficiently punish any whiffed attacks nearly anywhere, but it shouldn't be used carelessly. It's low enough to the ground that it can be hopped over, and since it takes forever to recover from many characters can punish on block or pre-emptively jump it. It's a good tool to get the opponent to want to jump, which leaves him open to 623S, but unless you have a good read you shouldn't toss it out randomly.

3C range is enormous and deceptively fast. Learning the maximum range on this one is good, since you can use it to setup knockdowns or prevent the opponent from setting up his own pressure. It is not terribly safe on block, even at furthest range, but since there is almost no hitstop they might not react fast enough to punish.

His rage balance is strongly balanced towards meditation, and it's highly recommended that you go that way because he is bad at forcing damage and his WFT is pretty much garbage.

Off of a dash, Sogetsu has a few options.
Since Sogetsu has to literally get right up in their face to throw, you can do one of these attacks late in order to catch anti-throw actions.
The weak point here is the slowness of the overhead. In online play it's more effective, but offline it's borderline useless except for setting up time slow combos, which limits the strength of this mixup.

Amakusa can outrange you and his teleport takes a huge dump all over your bubbles and water spouts. Even if you know to grab the teleport, with Sogetsu's pitiful grab range it's easier said than done. Get a life lead, park at Amakusa's maximum teleport range. If you get behind, you're going to have a hell of a time catching up again, as Amakusa's runaway is best at the same range Sogetsu's ability to pressure the opponent is.

Basara can literally dash through your spouts. Keep this in mind if you intend on running any sort of block recoil, since he really has no reason to care. Should Basara decide to proceed carefully, he punishes even B water spout with a simple 5AB on block, so don't just throw it out like you always do, for heaven's sake, please.