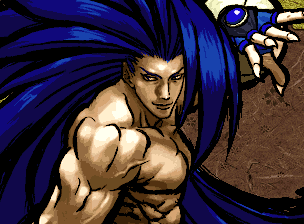 Suija's a very flighty character who wants to bait you into doing something stupid or make you freeze up, usually with a well-placed bubble, before hitting you for it. He's got a lot of tricky offense/defense/runaway courtesy of bubble alone, and a bunch of other ways to change his air momentum to boot. All of this airborne trickery comes at the cost of having no actual grounded specials, which forces him to kara cancel or tiger knee to get his specials out low to the ground. Being that he's constantly in the air, he has countless opportunities to connect with deep jumping attacks, which can potentially give him huge damage output.

Relying on so many input tricks and relatively tight windows to connect with attacks and having an esoteric gameplan means Suija is very difficult to play optimally compared to almost the entire cast, so if you play him and want to really get good, you're in it for the long haul.

Suija's only practical launcher, this leads to all of his best combos.

Normally your best option, it does the most damage.

Does slightly more damage than the above, only works near corner and harder to time.

On backhit or far hit, they'll be popped too high up to hit with Shougetsu, so you have to use this. On backhit do 8BC after Suija lands from 2AB so it connects.

Backup option in case you flub the cancel.

The only other combo that works on backhit. Hurts. A lot. Most likely you'll want to do this, but you might want to save your rage instead since Suija's lasts a long time.
Be warned that if you hit them from too far out with 2AB, the WFT won't connect.

Sneak in a bit more damage. Only works if the 5AB hits them in the air or from behind and they're close to the corner.

Another corner only combo. Delay the pursuit so it doesn't whiff.

Your only knockdown combo off of 6C that isn't WFT. Not very good damage, though.

Pretty lenient link, but requires basically point blank range (not as strict in the corner) and it's difficult to confirm the hit because of how fast you need to input it.

Requires backhit and close range. Tighter link than the above combo. Funny but you're better off just doing the WFT anti air instead of crossing under them with this.

50/50 out of a low bubble with both high/low leading to Issen. You can mix in 6C after landing.

Standard launcher combo. 2AB launching means it and any followups cannot be exploded.

Flashy launcher combo. Don't bubble too early or j.AB won't connect. You can do another bubble cancel into j.AB before the Issen but that's overkill and very difficult to do.

66C leaving them standing means you don't need to hard commit to 2AB to whiff punish during time slow. 66C is explodable though.

Requires quite a bit of time for the first hit, and you're probably better off with the Issen, but if you want to show off here you go.

If you are fighting against Suija, do not use heavy or punishable attacks and he will not be able to follow up his bubble easily. Easier said than done, but it's not as strong as it looks.

This is going to get pretty heavy into frames, so skip to the last line if you don't care why.

All bubbles have 6 frames of vulnerable recovery before you can attack.

The primary ways of getting into bubbles are from 5C, 5BC, 44, and 2AB. Each of these has its ups and downs.

The hitstun on deep hits should be known before you try to make use of this:

Now the important parts, for attacks blocked by bubbles:

For him to get a lot out of bubble tricks, it basically requires both a very good read and the opponent being willing to throw something large enough out that it can be punished.